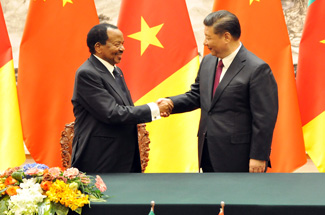 On day two of the State visit to the People’s Republic of China, President Paul Biya made important contacts after visits to strategic structures.

He began the day with exchanges with two top government officials.

First was the Chinese Prime Minister, Li Keqiang with whom the President re-echoed his resolve to foster south/south relations through mutually beneficial cooperation.

The delegation from Cameroon was later received by the newly elected Permanent Secretary of the People’s Congress of China. The Chinese and Cameroonian Parliaments have frequently carried out exchange visits and have maintained very close ties.

Apart from politics, the President’s second day in China had a serious economic undertone.

The company provides optical fibre for internet to Camtel and surveillance systems to other institutions.

The Cameroon delegation’s visit to Star Times was opportunity to assess the high technology brought to Cameroon in the process of modernising the Cameroon Radio Television and facilitating the country’s digital switch over.

The high point of the State visit to China was however the meeting between the Chinese President and President Paul Biya.

The exchanges were very warm and after a welcome ceremony, the two delegations had a session in which the Chinese President praised Paul Biya’s leadership qualities.

A state reception was offered in honour of the delegation of Cameroon led by President Paul Biya.