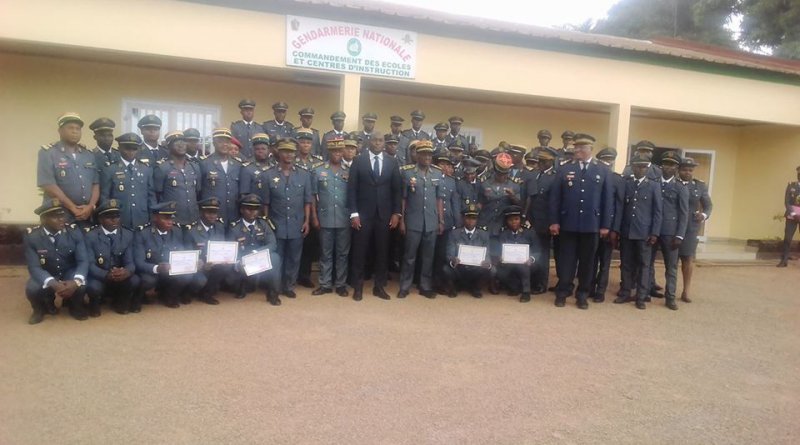 The 39th and 5th batches of the Practical Application Course for Officers and Non Commissioned Officers respectively of the National Gendarmerie have graduated.

They received their end of course attestations during a ceremony at Command for Gendarmerie Schools and Training Centres at Camp Yeyap Moussa in Yaounde.

The Secretary of State in the Ministry of Defence in charge of the National Gendarmerie, Galax Etoga presided over the ceremony which marks the official admission of the graduates into the Gendarmerie as Officers and Non Commissioned officers.

The Commander of the centre indicated that all 335 direct recruits into the National Gendarmerie as non commissioned officers could not attend the ceremony because two passed away during peace and law enforcement operations in the North West and South West regions of the Cameroon while others are still on the field. The non commissioned officers aged between 23 and 27 years comprise 64 girls and 271 boys.

They underwent a two year military training in Koutaba before proceeding to Yaounde for the Practical Application Course for Non Commissioned Officers.

The obligatory course that was initially scheduled for eight months was extended by seven additional months as they trainees were deployed complement their training with field experience in the domain of peace keeping and law enforcement in the North West and South West regions.

The non commissioned officers now qualify to work as assistants of Brigade or Peloton Commanders or hold positions equivalent to their rank in the headquarters.

Graduating Officers of the Gendarmerie

Those who took part in the 36th Officers Practical Application Course are former graduates from the Combined Services Military Academy, EMIA. They were part of three batches including Yusuf Mahamat Baha, 50th Anniversary of Reunification and Peace and Emergence.

The officers who took part in the obligatory course are aged between 25 and 33. Amongst them are two military magistrates. Four others were admitted into the school of magistracy during the course of the training.

Lieutenant Immaculate Mokom Tifuh; a military Magistrate who took part in the training said it added value to her skills especially as it helps her better understand the realities of investigations carried out by judicial police officers of the Gendarmerie.

The Secretary of State in the Ministry of Defence in charge of the National Gendarme Galax Etoga paid tributes to the fallen Gendarmes and those in hospital. He told the graduating batches to be exemplary in character, disciplined and serve the nation with honour and devotion.