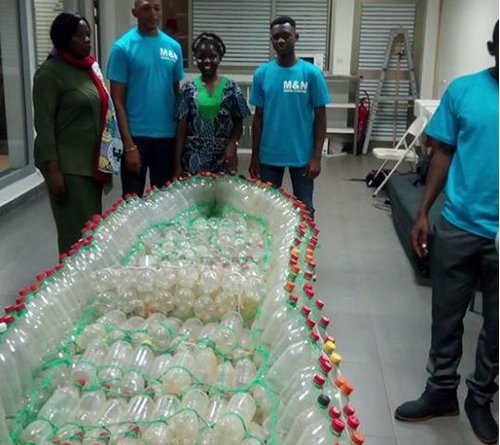 Protect the environment, while promoting the ecotourism is the vision, Ismael Essome Ebone.  The young Cameroonian, aged 28 has found a unique technique of recycling plastic waste through the construction of fishing boats.

He collects plastic bottles of various shapes and sizes, and uses codes to bind them together to produce various sizes of boats, that can be used for tourism and fishing. 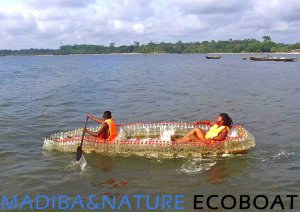 According to Ismael Essome Ebone, the “EcoBaots” will help reduce pollution by plastic bottles in urban areas, water bodies and beaches. His project inspired other youths and they founded an association called “Madiba and Nature” in 2016.

He works with other youths to produce the boats that also contribute to promote sustainable artisanal fishing and ecotourism, through the provision of recycled ecological canoes for neighbouring communities.

Less than two years after launching Madiba and Nature, the youths have worked  in collaboration with a community of 250 in Kribi, in the South region of Cameroon who are progressively adopting the use of Ecoboats in fishing and ecotourism.

Ismael Essome, who studies Environmental Management and Natural Resources at the University of Douala, in 2016, observed that a majority of plastic bottles of all sizes end up as litter in gutters, bushes, rivers, streams and other water bodies.

Madiba and Nature has launched a project called ’50 Fishermen with 50 Ecoboats by 2018 to boast fishing activities.

The ecoboats’ project has won a number of awards including:

The young environment engineer won the 2017

Despite the awards, the project still faces financial challenges. The association lacks the means of efficiently collecting plastic bottles in Cameroon’s economic capital, Douala, due to lack of collection and transportation mechanisms. The absence of eco trash cans also poses a challenge.