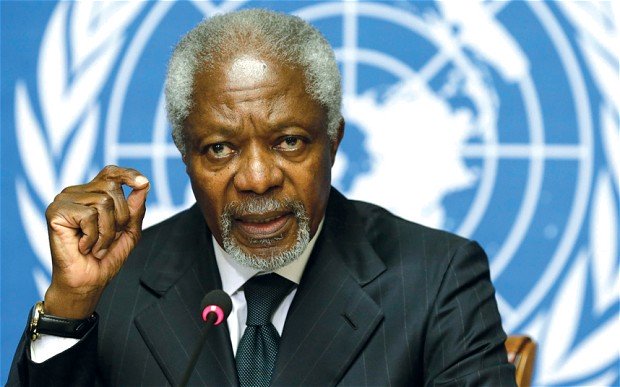 The diplomat who served as the seventh Secretary General of the UN between 1997 and 2006 died after a short illness this Saturday 18th August 2018.

Kofi Annan, one of the most read and celebrated UN Secretary Generals died in a hospital in Bern, Switzerland with his wife, Nane, and three children Ama, Kojo and Nina, by his side.

His family and the Kofi Annan Foundation made the announcement on his twitter page shortly after his death.

The statement described him as a “global statesman and deeply committed internationalist who fought throughout his life for a fairer and more peaceful world.”

The late peace builder who served the UN for ten years was the winner the 2001 Nobel Peace Prize for his humanitarian works.

Since his death, the media and other communication platforms have been highlighting his peaceful missions in the Middle East, Africa and other affected parts of the world.

Activists, politicians, celebrities and the world at large are outpouring their love to the family and his West African country, Ghana.

The United Nations Migration Agency confirmed his death in a tweet, saying: “Today we mourn the loss of a great man, a leader, and a visionary: former @UN Secretary General @KofiAnnan. A life well lived. A life worth celebrating.”

Born in Kumasi, Ghana, on 8 April 1938, he was the first secretary general to emerge from the ranks of United Nations staff.

He earlier served with the Economic Commission for Africa in Addis Ababa, the UN Emergency Force (UNEF II) in Ismailia, the United Nations High Commissioner for Refugees (UNHCR) in Geneva.

Mr. Annan also served as Special Representative of the Secretary-General to the former Yugoslavia (1995-1996), and facilitated the repatriation from Iraq of more than 900 international staff and other non-Iraqi nationals (1990).