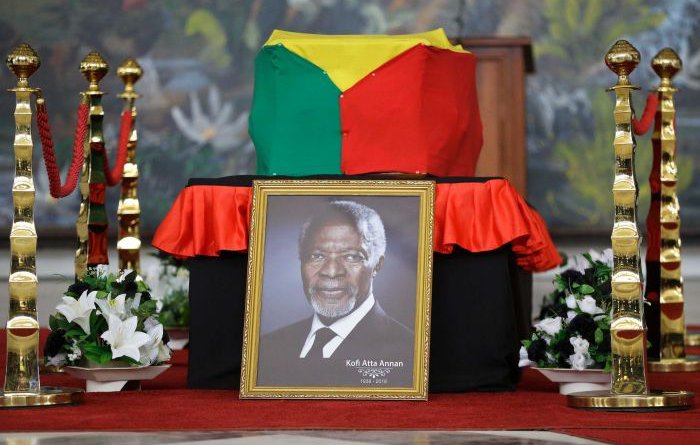 Former United Nations Secretary General, Koffi Atta Annan rests for eternity at the military cemetery in Accra Ghana. He was laid to rest in the land of his ancestors this Thursday, 13th September 2018 during an emotion packed ceremony attended by ten Africa Heads and State and a host of dignitaries from around the globe including UN Secretary General Antonio Guterres.

Flags were flying at half-mast during the three day state morning in honour of the fallen states man. The funeral service took place at the main hall of the Accra Conference Centre in Ghana. Most of the mourners present were dressed in traditional black and red attire to honour the Ghanaian-born former UN Secretary General who died last month.

Different speakers at the funeral ceremony described the late Koffi Annan as a dignified son of Ghana and the globe who inspired hope and peace.

UN Secretary General Antonio Guterres told mourners and several African Presidents and former presidents that when Mr Annan spoke, “The world would lean in to listen and we were rewarded with his wisdom.”

His daughter, Ama Anana Adedeji expressed her gratitude to her late father adding that it was difficult to tell him goodbye.

To bid the former UN secretary farewell, the Ghanaian president Nana Akufo-Addo described the late diplomat as a charming, elegant, peacemaker and above all proud African.

Besides Africa leaders or their representatives, former heads of State of Germany, Finland and Switzerland as well as Graça Machel, the former first lady of South Africa were also present to express their heartfelt sympathy to Koffi Annan who stood for peace and left remarkable footprints behind.