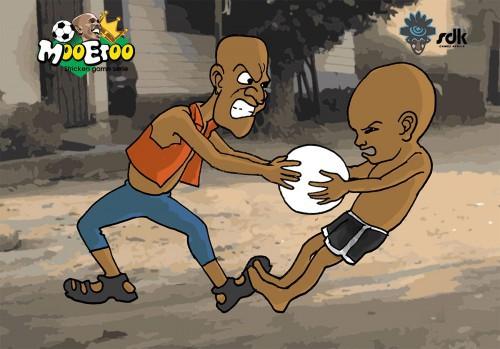 Video games have fast gained popularity amongst the youth as a favourite pass time activity.

Those who play video games say their favourites have greatly evolved since the late 90s when video games was introduced in Cameroon.

Some say video game houses are losing popularity among the youth as the games are more affordable nowadays.

Playing video games is not only common among teenagers in Cameroon. It spans across all age groups.

The interest in video games

Many people in Yaounde, Centre region who have the habit of playing video games express different reasons for doing so.

The most common reason given by many is that playing video games is a form of escape into a different world.

One of them is 33years old Jacques Biloa who says his favourite video game is soccer pro.

He says growing up, his dream was to become a professional footballer.

“When I play soccer pro I feel like I am realising my dream of being a professional footballer. I know it’s not real but at list I get to choose who I want to be in the virtual world.”

Others such as Mark Bertrand say they play video games just for entertainment.

“When I’m bored I get together with my friends and we play video games. It is much fun having them around.”

Mark adds that apart from being entertaining, it also gets competitive.

“Sometimes we play video games to see who is best at it. We even go as far as placing bets on which gamer we support. It’s usually very exciting.”

Since video games are very popular among today’s youth, some say they play video games just to be socially acceptable.

Jordan Nguepi who is now very good at playing video games says he had no interest in them in his early ages.

“I started playing Street Fighters because my friends spoke a lot about it. In order to relate and belong in their conversations I made my parents get me the game. Now I am a professional in it. We now play competitively.”

Even though video games have worn the interest of many, others still think traditional sports such as going out to play football and tennis are still the better form of relaxation and entertainment exercises.