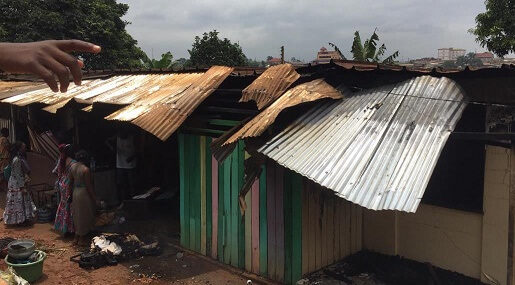 A fire incident of criminal origin at the Nkongkak neighbourhood has reduced four houses to ashes.

The fire broke out at about 4am in the morning of Tuesday, 20th August 2019. The fire fighters immediately respond to the alert  and put off the fire before it extended to other areas.

Though, the cause of the fire is yet unknown, the inhabitants of Camp Sic say it’s not the first time this is happening and it was put by thieves who wanted to broke into their houses.

“It is a new strategy used by thieves in this neighbourhood, they set the front door on fire which are made of wood” says source. The thieves do that to destabilize the people inside the house.

The fire incident ravaged up to four houses, this is because the houses are constructed with flammable material. The ceiling is made with a light plank which connects the houses. “even at 8am people get robbed” says Conrad.

Although no human life was lost, the people living in the first house were taken to the hospital for medical checkups, materials were damaged. At news time, the houses affected were still emitting smoke.

The police was at the scene to open investigations on the incident.