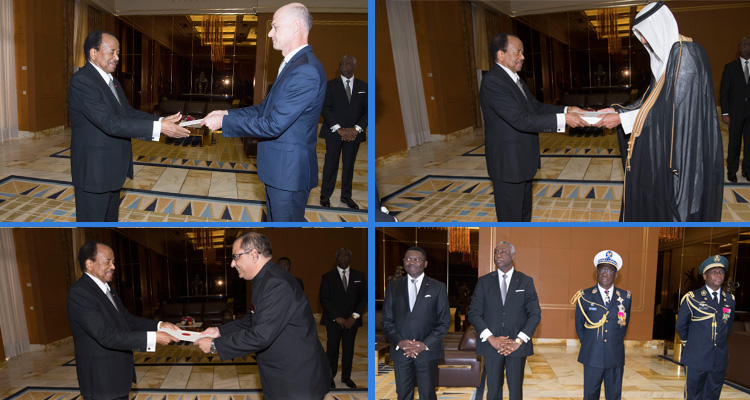 The three ambassadors from France, India and Saudi Arabia were at the Unity Palace to present their Letters of Credence.

H.E. Christophe Guilhou from France was first to be received. He was treated to the traditional protocol and honours reserved for personalities of his rank.

The holder of a Diploma in Eastern Languages and Civilisations and Political Sciences comes to Cameroon after serving in Djibouti as Ambassador.

Next was the Saudi Arabian Diplomat, H.E. Abdalelah Mohammed A. Alsheaiby.

After the brief honours at the courtyard of Unity Palace, H.E. Abdalelah Mohammed A. Alsheaiby was ushered to the President.

The new Ambassador comes to Cameroon after serving in Bangkok as Chargé d’Affaires at the Saudi Embassy in Thailand.

He is holder of a Bachelor’s Degree in Political Sciences and in Diplomacy.

He is first Indian High Commissioner with residence in Cameroon, reason for both men to salute the strength of diplomatic relations between Cameroon and India.

He has a Diploma in Economics and Trade.