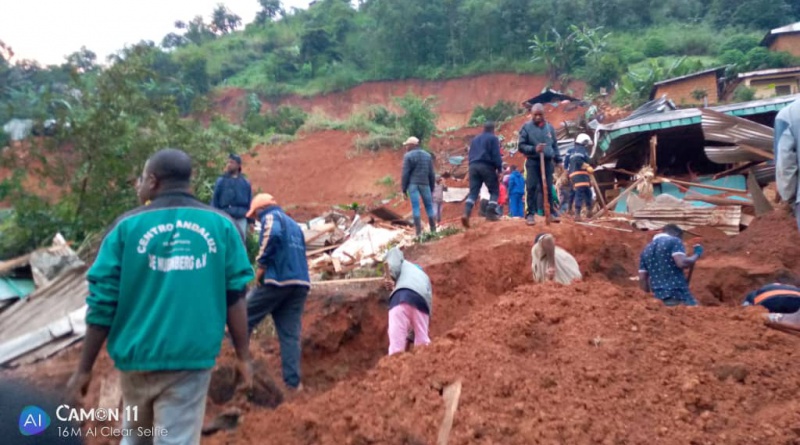 Forty-two  people have died and dozens  others still missing in Gouache IV bloc 6 Bafoussam lll following a landslide which surprised the victims in sleep.

According to innititial estimate, 13 homes were completely submerged by the moving earth, burying all but one resident.

The Governor of the west region, Awa Fonka Augustine and other administrative authorities have been coordinating the search and rescue efforts.

According to the Governor, the lone survivor is responding to treatment in the hospital, and nine corpses have already been unearthed .

Early this morning, the Minister Decentralization and Local Development George’s Elanga Obam travelled to Baffoussam with a FCFA 25 million aid for the victims.

On the instructions of the Head of State , Paul Atangana Nji , Territorial Adminustration Minister is heading to Bafoussam to assess the situation.

Meanwhile the Minister of Housing and Urban Development, Celestine Ketcha Courtes has organized a crisis meeting  at the Governor’s office on Wednesday 30th October.

This landslide follows recent floods in the Far North Region that have been accompanied by wanton destruction of farm land and property.

The administrative authorities have once again exhorted persons living in risky zones to leave the areas as the heavy rains persist.

The rescue mission was interrupted by rains at 8Pm this Tuesday 29th October . Given the lingering  fears of another landslide , inhabitants close to the scene of the incident have been asked to relocate to safer neighborhoods.

The President of the Republic, Paul BIYA, has addressed a message of condolence to the families of the victims through the governor of the West Region, Awa Fonka Augustine. The Head of State also tweeted on the tragedy this evening.