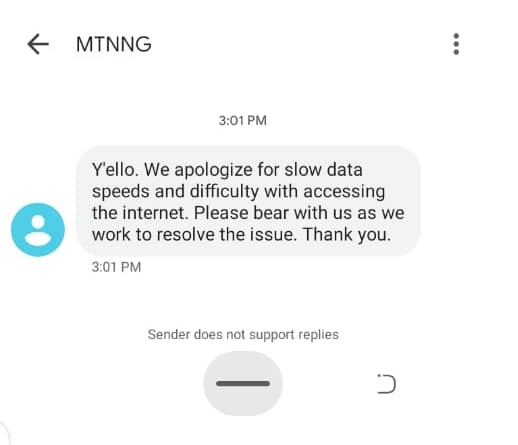 The network service provider company, MTN has issued a statement on its social media platforms assuring its users that internet connectivity will soon be restored to normal.

This follows the almost five days poor voice and data networks services users have been experiencing.

The company issued a statement stating that the slow service is due to damages of two undersea cables – WACS and SAT3/WASC cable systems – on the continent’s western coast.

The two undersea cables are near Libreville in Gabon and the other is in the vicinity of Luanda, Angola.

According to Openserve, a unit of South Africa’s biggest fixed-line telecommunications provider, Telkom SA SOC Ltd, the cables are in the Atlantic Ocean and connect South Africa and many other African countries to Europe.

This poor internet issue has pulled down browsing speed and kept users frustrated across some sub Saharan countries.

MTN Cameroon has been very active on its social media platforms apologising to complaining customers and assuring them that their team is working on restoring connectivity.

Y’ello @le_romario,
We are informed of the disturbances you encounter on the internet service. Our teams are working for a quick return to normalcy. We are so sorry for disturbances.
^Asa.

It is unclear on how long it will take for the problem to be resolved especially considering the cables are buried far underground the sea.

Frustrated users are already considering switching to other service providers in order to benefit from better internet connection.