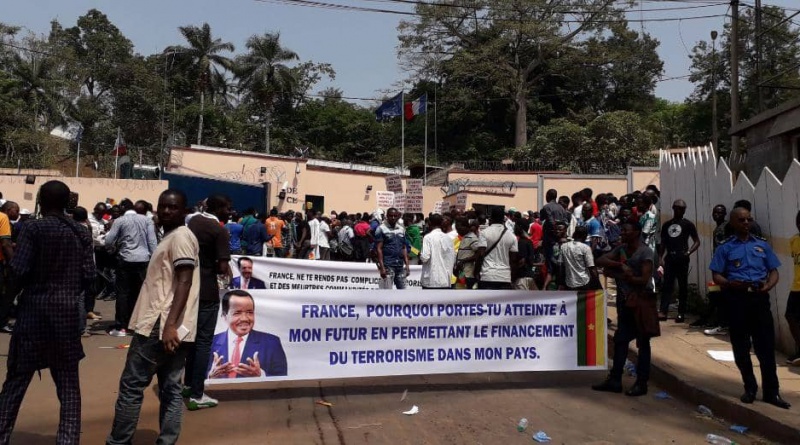 A sunny Monday morning in Yaounde, capital of Cameroon and a noisy one too. The French Embassy entrance is overcrowded.

Protesting youths most of them students of the University of Yaounde II, Soa taking a tough stance against French President Emmanuel Macron’s utterances to someone who introduced himself as an activist from Cameroon. Carrying banners, placards and peace plants, the youths began a protest march that ended in front of the French embassy.

#Cameroon #Protest Some young Cameroonians were on the streets of Yaounde this morning, protesting against utterances…

They were summoning the French President or his representative in Cameroon, the ambassador, to present an apology to Cameroonians for what they described as condescending utterances.

The messages on the boards translated their state of mind. Youths protest in front of the embassy: The Genesis

On Saturday, February 22, 2020, French President Emmanuel Macron responded to concerns raised by an individual who declared he was an activist from Cameroon.

The latter painted a fallacious and gruesome picture of the socio-political situation in Cameroon.

In his response, President Emmanuel Macron seemly agreed with the description of the situation in Cameroon. He also made other declarations that violated diplomatic canons.

His constant mention of “putting pressure on President Biya” was very offensive to Cameroonians of all political leaning.

Cameroon as a sovereign state has a leader who has been democratically elected and shouldn’t receive orders from without, Cameroonians say.

Most also argued that the internal problems of the country should be handled by Cameroonians.