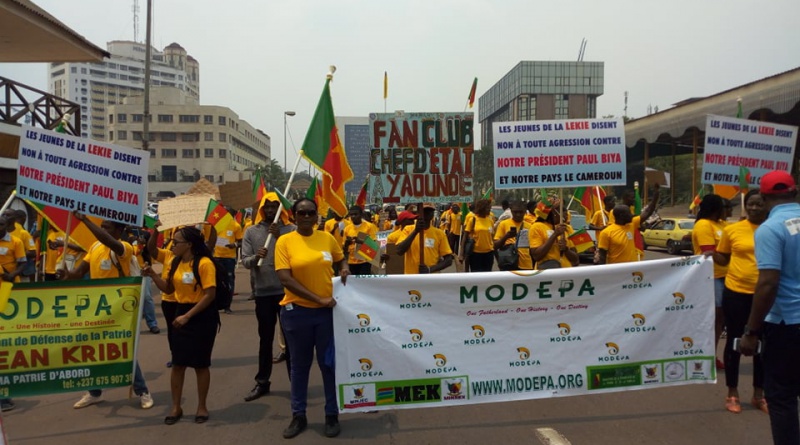 Dressed in yellow T-shirts, they congregated at May 20th Boulevard where it all started.

#Cameroon_France
It was Day 2 of public #protest in #Yaounde this Tuesday 25th February 2020. Young Cameroonians flooded the streets in a march that began at the May 20 Boulevard. They are resolved to protect their country against foreign aggression. pic.twitter.com/DukpfYfKTB

The banners, placards and flyers which most were carrying, told a whole story of its own.

The songs chanted on the occasion sent strong signals of the Youth’s unflinching support for their country and its leader.

Through patriotic song, President Paul Biya was assured that the Youth are ready to lead the course in defending their country against foreign interference. The message sent to the French leader on Monday during the first day of protest in front of the French embassy was once again reechoed; President Emmanuel Macron needs to tender an apology to Cameroonians for the reprehensive and undiplomatic utterances to an activist.

The President of “Du Mouvements de Défense de la Patrie” MODEPA, Meka Georges Clement coordinator of the protest in Yaounde told the press that  their objective is to tell the World that Cameroon is a sovereign state.

That the country deserves mutual respect from whichever state talk less of a friendly country like France.

If the level of mobilisation in Yaounde this day is anything to go by, analysts will be agreed that the Youth of Cameroon are determined to shun any form of neo-colonial attitude from the western world.