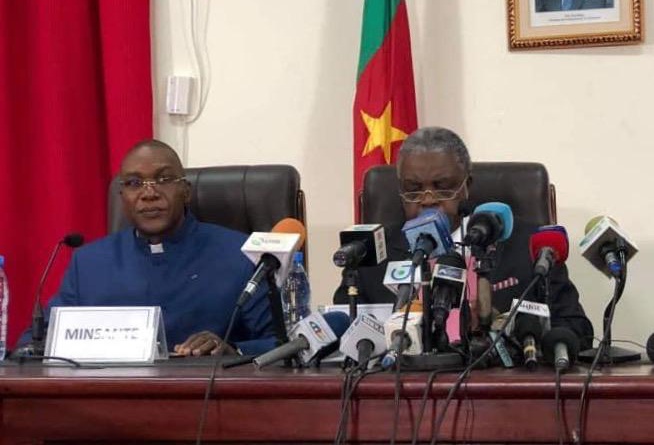 It was during the second in a series of press briefings co-chaired by the Ministers of Communication and Public Health on Wednesday March 25, 2020 in Yaounde.

Given the recurrence of fake news on social media, government has undertaken to provide updated information on the COVID-19 saga on a daily basis.

Quarantined  persons who came into Cameroon

The Public Health Boss stated that some 550 persons who came  into Cameroon few days before the country’s borders were closed, have been quarantined for a period of two weeks pending screening for COVID-19.

Most of these persons (284 in Douala and 271 in Yaounde) presently
confined in hotels and homes, came in from affected countries.

Since they were quarantined, screening has been carried out on 65 persons, 13 have tested positive.

The  COVID-19 situation in Cameroon

The Minister also noted that 90% of those who have been tested positive are imported cases , while the rest of the 10% have been contaminated by these infected cases.

Assessing the state of the sick persons, the Minister indicated that 69 of the 75 infected persons are doing relatively well. Some might be discharged by weekend if their medical condition continues to be encouraging and after control tests must have been carried out.

Dispelling rumours of the death of a COVID-19 patient in Douala, Dr Malachie was emphatical.
“Only the Cameroon Centre Pasteur screens people for COVID-19. Centre Pasteur did not receive samples from the late individual, and can not scientifically proof that he died of COVID-19 or not”

Another call for a high sense of discipline

Dr. Manaouda Malachie reminded Cameroonians of the need to strictly comply with the 13 point safety measures enforced  by the  government , on March 17, 2020.

He reiterated the Head of Government’s warning concerning defaulters stating that, henceforth there will be sanctions.

The Minister of communication frowned at the nonchalance of some Cameroonians.

He indicated that many drinking spots still remain open after 6pm, with crowded clients.

Others even perpetrate aggressive acts against administrative authorities and forces of law and order on duty.

He pointed to overcrowded motor parks , mortuaries and funerals as common practices that go against government’s 13 point safety measures.

Also, the common practice of regular handwashing with soap is ignored, while the exchange of hugs and handshakes is still witnessed.

Government also frowns at those persons who were quarantined  but later left against the instructions  of public health authorities only to eventually infect others.

Health workers who have been on the frontline since the outbreak of COVID-19 in Cameroon were given thumbs up for their resilience.

The staff of the Cameroon Health Emergency Operational Centre were commended for an unequaled commitment  to preserve the lives of Cameroonians.

Cameroon’s  government also saluted efforts from some International bodies and friendly countries for the remarkable support to Cameroon.

Media persons were also congratulated for their aggressiveness in educating the public on the dangers of COVID19. They have been told to accelerate sensitization efforts with emphasis on government’s safety measures, and to counter fake news