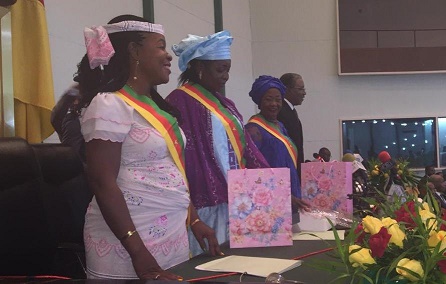 At the start of a new legislature at the National Assembly, a provisionary bureau is set up to run the affairs of the house till elections for a permanent bureau are held.

The provisionary bureau is composed of three members led by the eldest member who is assisted by two youngest members.

During the 10th legislature that bagan since March 10, 2020, the eldest and two youngest members are all women.

It’s the first time in Cameroons parliament that the three member bureau is feminine.

The eldest member, Honourable Laurent in Koa Mengue Epse Mbede of the CPDM and her two fellow sisters, Nafissatou Alim of the CPDM and Dague Aïcha of the MDR, have become the pioneer female trio.

The unprecedented page in the history of the National Assembly of Cameroon has the fruit gender parity law introduced to encourage women’s involvement in politics and decision making.

In 2019 during the 9th legislature, only a single woman, Kwarmba Solange was part of the bureau. It didn’t arouse as much curiosity.

Who is the eldest member?

The eldest member of this 10th legislature is a former Mayor of the Soa council in the Center region.

She is also a seasoned politician who has been re-elected CPDM member of the National Assembly for Mefou and Afamba in the constituency.

The member of the National Assembly was wife of the late Pr. Joseph Mbede, former Minister of Health who died on March 19, 2019.

During the opening of the statutory session at the National Assembly, Honourable Laurentine Koa Mengue Epse Mbede presided the plenary assisted by two youngest deputies.

She called on members of the National Assembly to work together for public interest if Cameroonians.

Nafissatou Alim is CPDM member of Parliament for Mayo-Louti in the North region. She joined the Women’s wing of the Mayo-louti center section of the CPDM in 2013.

The young member of the National Assembly is single without children and comes from a Muslim family.

Before joining the National Assembly, she worked as Secretary at the Divisional Delegation of Secondary Education in Guide.

She was recruited into the public service from the 25,000 young graduates decided by the Head of State.

On her part, Tague Aïcha, engaged in politics under the banner of the MDR in the Mayo-Kani Sud constituency in the Far -North region.

In her twenties, the determined Honorable Aïcha has given hope to young girls in her region.

The two youngest members of the National Assembly are among the 91 new comers out of the 167 elected.

As work begins in earnest, the MPs will be expected to make laws that will contribute in improving the welfare of their populations.

Une pensée sur “National Assembly: An All Female Team at the Head of the Provisionary Bureau”