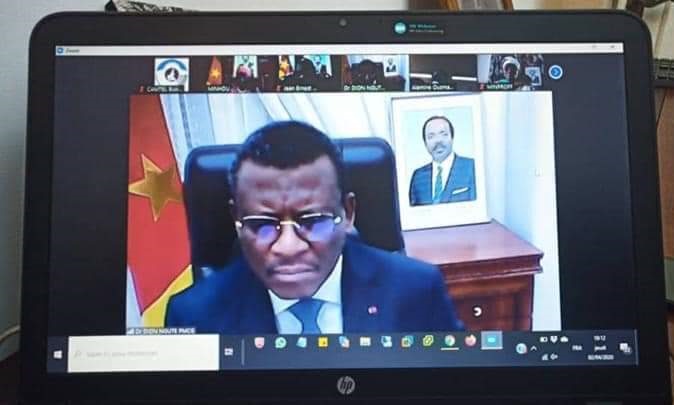 The Prime Minister Head of Government, Chief Dr Joseph Dion Ngute has given a number of instructed Inter Ministerial Committee in charge of the evaluation and monitoring of the implementation of Government’s response strategy against the COVID – 19 pandemic in Cameroon.

He instructed the Minister of State, Minister of Justice and Keeper of Seals to continue working closely with the Ministry of Public Health to limit the spread of the corona virus in prisons.

The Minister of External Relations was charged to expedite the repatriation procedures for Cameroonians in distress abroad in line with the directives of the Head of State.

The organisation of measures for the confinement of repatriated Cameroonians and the establishment was specialised treatment Centres for Covid19 patients were attributed to the Minister of Public Health in conjunction of the Governor of the Centre region.

The distribution of medical products and equipments offered by the Head of State as part of the fight against the disease will be closely monitored by the Minister of Decentralisation and Local Development.

The Minister of Territorial Administration in conjunction with the Minster of Public Health will ensure that persons who died of the novel corona virus are buried in their places of death.

Reflections on ways by which pupils and students can resume schools and universities as soon as classes begin by the indicative date of June 1, 2020 will be conducted bt the Ministers in charge of the education sectors.

The Prime Minister also invited everyone to be mobilised and committed to the fight against the Covid-19 pandemic and ensure the respect of barriers gestures especially the systematic wearing of mask in public places.

The Head of Government gave the instructions during a video conference meeting of the Inter Ministerial Committee in charge of the evaluation and monitoring of the implementation of Government’s response strategy against the COVID – 19 pandemic in Cameroon.

The meeting was sanctioned by a press release sanction by the Secretary General at the Prime Minister’s office, Seraphine Magloire Fouda. 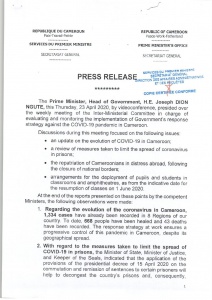 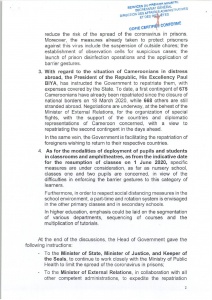 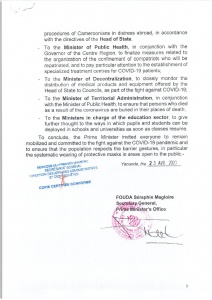