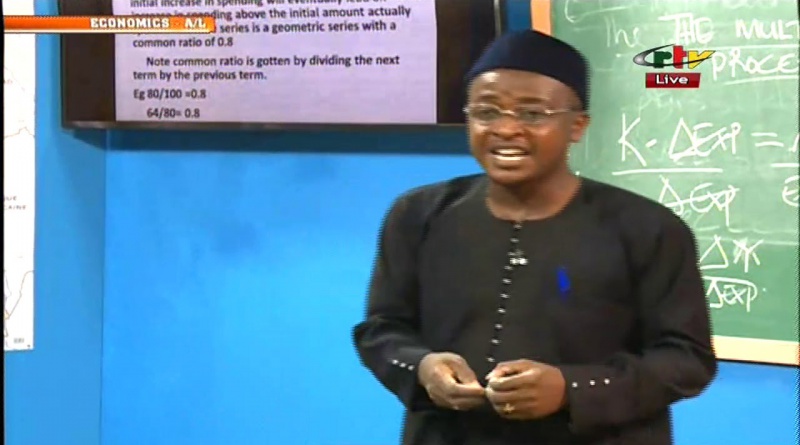 OBJECTIVES: At the end of this lesson the learner should be able to:

MEANING OF THE MULTIPLIER

For example, suppose variable X changes by 1 unit, which causes another variable Y to change by M units. Then the multiplier is M.

Also, the multiplier can also be seen as the coefficient by which an initial change in injection is multi plied to obtain the resultant change in income. That is,

Where  is the change in income?

K is the multiplier
is the change in expenditure

Hence if investment increases by 100 million FCFA and this causes incomes to increase 500 Million FCFA then the value of the multiplier will be?

ASSUMPTION OF THE MULTIPLIER

The multiplier is based on the following assumptions:

Let us assume that there is a constant MPC of 0.8 and that the government of Cameroon wants to spend 100 billion FCFA to construct a stadium. This 100billion is paid to the contractors who spends some of the money in buying equipment, materials, employing workers etc. Taking into consideration the MPC of 0.8 he spends 80billion.The various groups who receive this money now go and spend some of the 80 billion FCFA, of this ,64 billion may be spent by the various agents in the economy. The 64billionFCFA become incomes for another group, who spend some of it and the process continuous………….

From the extract, it is realized that the initial amount of 100billionFCFA creates a series of smaller increases in the economy in relation to spending.

ILLUSTRATION OF THE MULTIPLIER

From the extract, an increase in investment(I) of 100billionFCFA generates an increase in spending, given an MPC of 0.8 as shown by the series below:

Note common ratio is gotten by dividing the next term by the previous term.

The resultant change in income () from an initial investment is given by:

MULTIPLIER IN THE DIFFERENT SECTORS OF THE ECONOMY

In a two sector economy, the only withdrawal is savings. Therefore,

A three-sector economy has two withdrawals. That is savings and taxes. Here,

Where mpt is the marginal propensity to tax

A four- sector economy now includes imports; therefore, the multiplier will be;         K=

OTHER TYPES OF MULTIPLIERS

Generally, the multiplier could be seen as =           , where W is the marginal propensity to withdraw (mpm)

Hence for the government to increase national income to a new level of 125millionFCFA, she must increase her expenditure by 10millionFCFA.

Calculate the value of the multiplier.