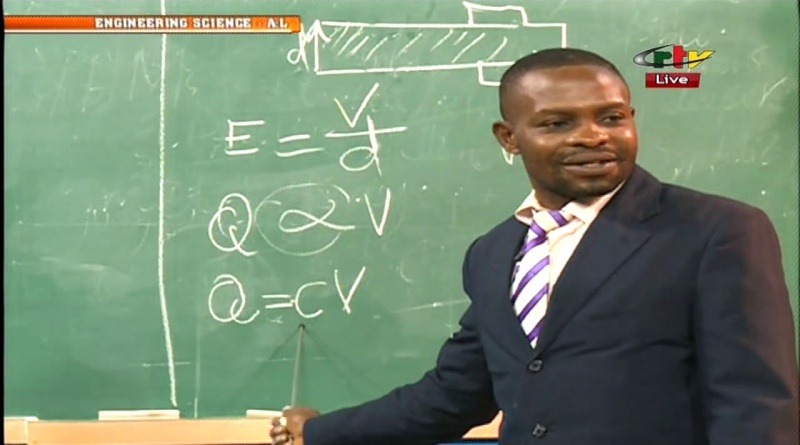 dipole at X midway between A and B

Find the electric field of the dipoles at Y

Since they are in opposite directions

At the end of this lesson students should be able to:

A capacitor is a device capable of storing electrical energy.

Figure 8.1 shows a capacitor consisting of a pair of parallel

Metal plates X and Y are separated by an insulator, which could be air. Since the plates are electrical conductors each will contain a large number of mobile electrons. Because the plates are connected to a d.c. supply the electrons on plate X, which have a small negative charge, will be attracted to the positive pole of the supply and will be repelled from the negative pole of the supply on to plate Y. X will become positively charged due to its shortage of electrons whereas Y will have a negative charge due to its surplus of electrons.

The difference in charge between the plates results in a p.d. existing between them, the flow of electrons dying away and ceasing when the p.d. between the plates equals the supply voltage. The plates are then said to be charged and there exists an electric field between them. Figure 8.2 shows a side view of the plates with the field represented by ‘lines of electrical flux’.

If the plates are disconnected from the supply and connected together through a resistor the surplus of electrons on the negative plate will flow through the resistor to the positive plate. This is called discharging. The current flow decreases to zero as the charges on the plates reduce. The current flowing in the resistor causes it to liberate heat showing that energy is stored in the electric field

8.1.1   Summary of important formulae and definitions

From the above lesson charge Q is given by:

where I is the current in amperes, and t the time in seconds.

A dielectric is an insulating medium separating charged

Charge Q on a capacitor is proportional the applied voltage,

Where the constant of proportionality, C, is the capacitance

The unit of capacitance is the farad, F (or more usually F =10-6F or pF = 10-12 F), which is defined as the capacitance of a capacitor when a p.d. of one volt appears across the plates when charged with one coulomb. Every system of electrical conductors possesses capacitance. For example, there is capacitance between the conductors of overhead transmission lines and also between the wires of a telephone cable. In these examples the capacitance is undesirable but has to be accepted, minimised or compensated for. There are other situations, such as in capacitors, where capacitance is a desirable property. The ratio of electric flux density, D, to electric field strength, E, is called absolute permittivity, , of a dielectric.

Permittivity of free space is a constant, given by

d = thickness of dielectric in m

and n = number of plates

Example 1. (a) A ceramic capacitor has an effective

Exercise1. A waxed paper capacitor has two parallel plates, each of effective area 800 cm2. If the capacitance of the capacitor is 4425 pF determine the effective thickness of the paper if its relative permittivity is 2.5