Three days to school resumption for examination classes, most parents in Cameroon have expressed worries about the rising numbers of new Coronavirus infections in the country. Recent figures indicate that Cameroon counts over 5000 cases of COVID-19 with some one thousand eight hundred recoveries and, one hundred and sixty deaths.

With an alarming number of over 1500 new cases in some five days, parents are bordered on what the future holds for their children if they finally go back to school on June 1, 2020 as prescribed by the state.

A parent like Edith Koffi in Buea says the pandemic keeps threatening every aspect of life, and to her the world needs a belt out, not hasty decisions.

The mother of two without any fear of doubt insists that her children will not resume school come Monday, June 1, 2020. 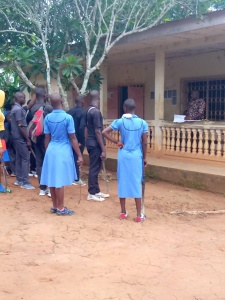 Mua Patrick in Yaounde is one of those parents who think schools should be indefinitely postponed till further notice.

“We can not be talking of back to school when the number of cases of Coronavirus keep increasing by the day” he adds.

The young parent thinks that measures like disinfecting the campuses and imposing face masks on school children is yet another cosmetic move.

Mr Mua further argues that adults have not been able to completely adapt to the face masks therefore he thinks children can not even be conscious of it.

Another parent who asked to be called Ghislain is completely against the idea of reopening schools in the middle of a health crisis.

He thinks the government is just fighting hard to avoid a blank school year and not considering the negative toll a decision like this will have in the life of a country.

To an extend he thinks primary and secondary schools should not reopen and if they must, only examiners for the FSCL and the GCE O and A Levels. He adds that at the higher education, students are mature and can be discipline enough to respect barrier measures thereby reducing the rate of contamination.

Ngong Pius a father of five in Douala says he will not risk sending his children to school when the Coronavirus is still looming outside.

A mother like Emmanuella Che says the numbers have increased at a geometric rate and the reason for which children were asked to stay home has not been addressed then why worry to send them back.

Valentine Neba on his part says schools can resume for a while just for examination classes with strict hygienic measures and total respect of social distancing.

Charles Yves argues that the government has to chose between the future of the Cameroonian kids and the public health of all its citizens.

Every parent is seemingly doubting the safety of his or her child but government is on the offensive to ensure the safety of the children when schools will throw open their gates come Monday June 1, 2020 as presumed.