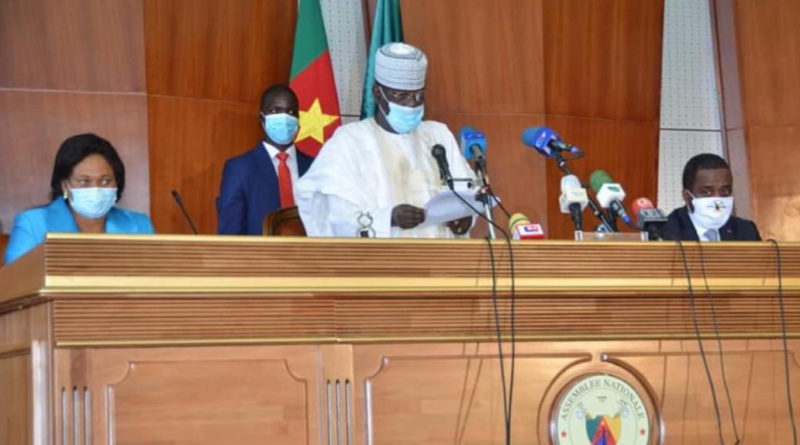 The Speaker of the National Assembly, Honourable Cavaye Yeguie Djibril has officially closed the June session at the lower house of Parliament.

The solemn closing plenary was attended by a host a state dignitaries including the Prime Minister, Head of Government.

Seven bills were examined and adopted during the session pending promulgation by the President of the Republic.

The closing plenary was highlighted by the handing over to the Prime Minister, the Sum of 100 million CFA F donated by all the political parties represented at the National Assembly for the National Solidarity Fund for Covid19 disease control.

The session was also marked by the holding of the first budgetary orientation debate in the 10th legislative period. The debate paved the way for Parliament to contribute to the elaboration of the 2021 state budget.

The June session also saw the organization of extra parliamentary activities including the forum on the promotion of traditional medicine, the economic patriotism day to promote made in Cameroon products amongst others.

The closing plenary was the occasion for the House Speaker to salute Members of the National Assembly for working under the challenging conditions imposed by the Covid19 pandemic.

He also commended the Head of State for measures taken recently to increase the retirement ages of health works. In the same light he commended health professionals and those assisting them in doing their utmost to role back Covid19 in the country.

He also recalled that the safety of all lies in the respect of barrier measures.
The session also saw the presentation of a book on parliamentary correspondence written by Honourable David Manfouo.

The members of the National Assembly now go on a three months recess to resume in November for the session dedicated to the examination of the state budget for 2021.