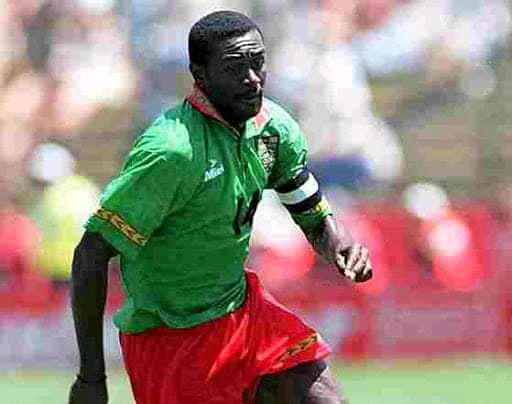 Stephen Tataw, the celebrated 1990s Captain of the Indomitable Lions of Cameroon is dead. The 57-year old football legend died this Friday, July 31, 2020, in Yaounde after a brief illness.

At the club level, he played with Tonnerre Yaounde from 1988 to 1991, and for Olympic Mvolyé from 1992 to 1994. He is probably best remembered as the captain of Cameroon during their historical run at the 1990 FIFA World Cup, where the team became the first African nation to reach quarterfinals.

He worked with the Cameroonian Football Federation, FECAFOOT before his demise.

One of Tataw’s last official outings was during the Draw Ceremony of the postponed 2020 African Nations Championship, CHAN.

Stephen Tataw was born on March 31, 1963 in Yaounde, Centre Region of Cameroon.

The Right back player hails from the Southwest Region of Cameroon

The late football legend started off his football journey between 1988-1991 when he signed up with Tonnerre Kalara Club of Yaoundé.

Three years later, that is, 1991-1994 the Iconic footballer played with Olympique Mvolyé in Yaounde.

Career With The Indomitable Lions Of Cameroon

The late football legend featured in 43 national selections with the Indomitable Lions of Cameroon.

Stephen quits the scene with a record of the 1988 winning team of the African Nations Cup with Cameroon.

He was quarter-finalist at the 1990 World Cup in Italy.

His squad bowed out of the 1994 World Cup in the USA at the group stage of the competition.

Worthy of note is the fact that, Stephen Tataw featured in the list of the 1990 Indomitable Lions team, a squad that was eliminated at the first phase of the games at the continental event.

Stephen Tataw is the third player to die from the historic 1990 squad of the Indomitable Lions of Cameroon. The other two are Benjamin Massing and Midfielder, Louis-Paul M’Fede.