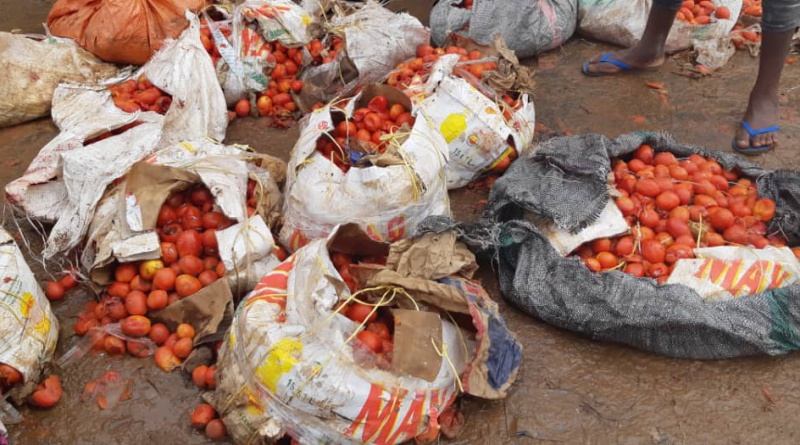 Two farmers are reported to have committed suicide one at the “Marche 8eme” Yaounde and another in Bangangte in the West region, after experiencing poor sales from tomatoes. The reason advanced is that they are unable to recover the money to repay the loans they incurred to invest in their tomato farms this season.

Farmers in Cameroon are hard hit following the drastic drop in the prices of tomatoes. The #COVID19 pandemic that caused borders with neighboring countries to be closed, has heavily affected the sales. Countries like Nigeria. Equatorial Guinea, Gabon, Chad, Congo and Central African Republic that were lucrative markets for the over 877.937 tons of tomatoes produced annually, have seen the borders blocked from the importation of goods.

The farmers have been targetting this sub regional market before producing. Nigeria alone used to buy over 10.000 baskets of tomatoes daily from Cameroon. This has caused huge amounts of tomatoes to reflux into local markets with a drastic drop in the prices.

A basket of tomatoes that used to cost between 4000frs and 5000frs during peak harvest season has dropped to between. 1000frs and 2000frs. Major towns like Yaounde, Douala, Bafoussam, Bamenda, Bertoua, have witnessed their markets flooded with tomatoes cultivated in almost all the regions of Cameroon.

The ” Marche 8eme” in Yaounde specialized in the sales of large amounts of vegetables and spices is the epicentre of the tomato flood. Before the COVID-19 crisis, this market used to receive about 50 truck loads of tomatoes daily, said Joseph Kana, member of the Association of tomato vendors. But today he said about 150 to 180 trucks bring in tomatoes, causing the supply to be far more than the demand. This has caused them to adopt the mobile sales of tomatoes.

Many of the tomatoes dealers explained ” we are forced to hire vehicles to move from door to door, market to market to solicit consumers to buy at a give away price of 1500frs to 2000frs”. This has encouraged many households to buy tomatoes in bulk. Some grinding and storing in refrigerators ahead of out of season consumption.This door to door sales has also killed and the harmpared the activities of retailers.They hardly make quick business these days because consumers go for tomatoes in baskets.

Farmers Forced To Come And Sell  Tomatoes In Town

Traders have abandoned the activity causing farmers to bring their produce to market themselves. Kana Joseph who is also an executive member of the Association of tomato dealers said one farmer recently killed himself at the 8eme market because he sold at a deficit. “At the start of the farming season he contracted a bank loan of 12 million FCA. After sales he had only 2 million FCFA in hand. So he chose to take away his life”.
This is not a unique case. Many tomatoes farmers are said to have killed themselves. Others slump in severe health crisis as a result of what they are facing.

The highly perishable nature of tomatoes and the high cost of production is the main cause of the tomato crisis in Cameroon. It takes about 4 million FCFA to cultivate a hectare of tomatoes. Including intensive human labour and chemicals to treat the crop which is highly prone to disease. At the end of a successful season, one hectare could fetch the farmer between six to seven million FCA.

The Vulnerability Of Tomatoes

Other crops in season have not been much affected like tomatoes because they are not so perishable. So far there are no facilities to process tomatoes to increase their shelf life. One of the traders braved the odds to take a heavy truck load to the borders with Nigeria. He was refused entry. The rotting tomatoes were abandoned there and he lost about 5 million FCA.

Most dealers in the sector are clamoring for the authorities to open the borders so the crops can be evacuated to target markets. Others have proposed the setting up of a tomato transformation facility.