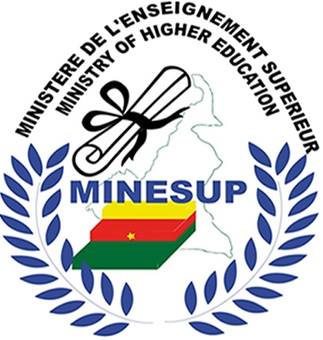 Bachelor’s, Masters and Doctorate degrees issued by three institutions in Cameroon have been nullified by the Minister of State, Minister of Higher Education and Chancellor of Academic Orders, Prof Jacques Fame Ndongo.

The information is contained in three press releases indicates that they have not respected the terms of their accreditation.
They include: 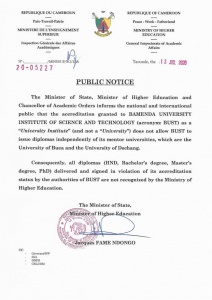 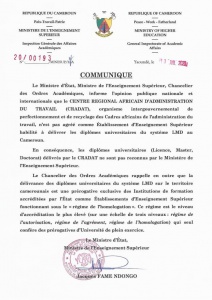 *BUST*
According to the release of the Minister of State, Minister of Higher Education of July 13 2020, the Bamenda University Institute of Science and Technology (BUST) is a recognised University Institute under the supervision of the Universities of Buea and of Dschang.
According to the accreditation all diplomas issued (Bachelors, Masters and PhD) are supposed to be cosigned by BUST and the supervisory Universities of Buea and of Dschang.
Consequently certificates issued and signed independently by BUST in violation of its accreditation are not recognized by the Ministry.

*CRADAT*
The African Regional Centre For Labour Administration (CRADAT), in it’s French Acronym, is not approved as a higher education establishment empowered to issue university diplomas from the LMD system in Cameroon.

The Minister of State noted that the Bachelors, Masters and Doctorate degrees issued by this Centre are not also recognized in Cameroon.

In his response, the Director General of the African Regional Center for Labour, Arsène Armand Hien in a press release signed on Tuesday July 14, 2020 highlighted the international character of the center.
He wrote that CRADAT is an institution owned by 18 member states, recognized by the Government of Cameroon through the headquarters agreement signed by the Minister of External Relations as well as the convention establishing the status of the School.

Arsène Armand Hien also called on students and teachers of the Institution to remain calm while issues are sorted out with the Ministry of Higher Education. 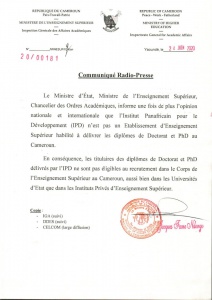 *PAID*
The Minister of State in Charge of Higher Education on June 24, 2020 signed a similar note addressed to the Pan African Institute of Development.
Minister of State, Jacques Fame Ndongo clarified that holders Doctorate and PhD diplomas issued by this Institution are not eligible for recruitment into the higher education body in Cameroon in both State or Private Institutes of Learning for similar reasons.