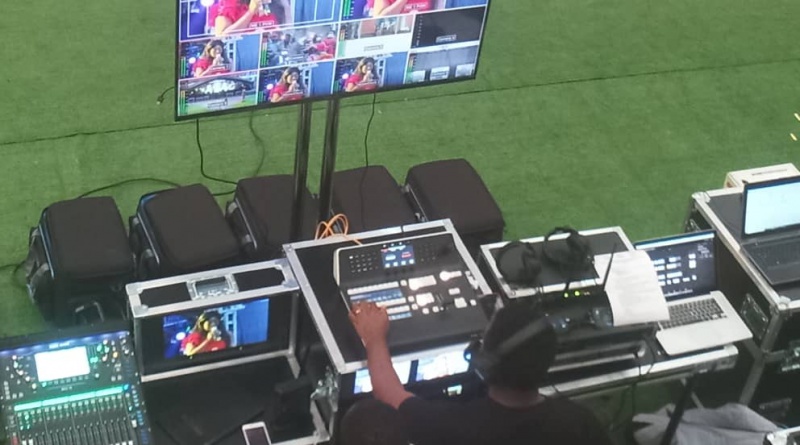 Eight tons of event organisation equipment have been officially received by the Minister of Sports and Physical Education, Narcissus Mouelle Kombi at the Yaounde Multipurpose Sports Complex in Yaounde.

The events organisation equipments were purchased by government in view of a memorable hosting of the African Nations Championship, CHAN in 2021 and the African Cup of Nations, AFCON in 2022.

– A mountable podium and other accessories.

The brand new production material were display and used for the first time during the official reception ceremony at the Yaounde Multipurpose Sports Complex on Friday September 25, 2020.

The sports Minister said Cameroon has become the first country in sub Sahara Africa to should such a magnificent jewel.

He added that the equipments acquired with state budget following the approval of the Head of State are public property and will be deployed during CHAN and AFCON as well as other major events.

The equipment is a illustration of the Head of State’s desire the grand the continental football jamboree the grandeur they deserve.

They material will be used most especially during the opening ceremony, the finals and fan zones in different host cities for cultural and artistic deplays during the competition. Professor Narcisse Mouelle Kombi said.

The events organisation equipment for CHAN and AFCON will be used for other public and private events on certain conditions. The Sports Minister added.

The event to official receive the equipment was attended by a college of state dignitaries.

Unveiled for the first time, some Cameroon artists were privileged to inaugurate the brand new equipment.

For two hours, different artists took turns to thrill the public that was amazed by the light and sound effects from the digital equipment.

Modem and traditional musical displays gave a foretaste of what the CHAN to to organized in a few months will look like.
Tara, the mascot of the competition dazzled the public with his performance especially when the theme song of the competition was staged.

The entire Cameroonian team behind the consoles had been trained as part of the agreement between government and her technical partner.

In a bid to show their know-how, while the National Anthem was song, the technicians produced lights effects the gave the green, red and yellow colors representing the National Flag.

They also projected the event life an the brand new LCD giant screen.

The event was also life on the facebook page of the Ministry of Sports and Physical Education.