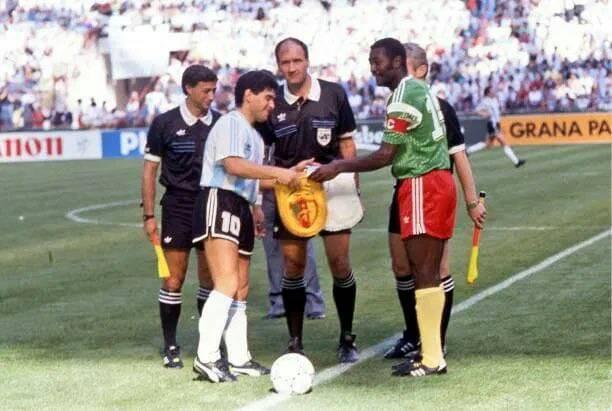 A footballing nation like Cameroon share memories with one of the world’s greatest footballers, if not, the best, late Diego Maradona, the Albiceleste Superstar who died of a heart failure in home this November 25, 2020. The world mourns a football legend and Cameroon most especially football lovers keep great memories and remember the 1990 World Cup expedition in Italy where the Indomitable Lions stunned the famous reigning champions, Maradona’s Argentina to a 1-0 win as if it happened just yesterday.

On his Instagram page, Diego Maradona posted a photo of him and Stephen Tataw before the famous Group B game pitting the Indomitable Lions of Cameroon and the Albiceleste of Argentina at the San Siro Stadium in Italy

The historic image had this obituary, “30 years ago, with Stephen Tataw, Captain of the ” Indomitable Lions” of Cameroon at the 1990 World Cup. My respects to your family, may you rest in peace.”

The two late iconic captains made history in football. Stephen Tataw led Cameroon to the 1990 and 1994 World Cups, the victory of Cameroon over Argentina and Columbia made Cameroon and the African continent to believe it was “Africa’s World Cup.” Football legend, Diego Maradona led his country as captain to the 1986 and 1990 World Cups. The late celebrated footballer helped his country win the 1986 World Cup over England with his infamous “Hand of God” goal, and four minutes later he literally dribbled the whole English attack and defence, and scored again. When you talk about Maradona, Cameroonians football lovers of all generations vividly recount or remember how Cameroon shockingly heralded a 1-0 win over Argentina thanks to a 64th minute world class header from Francois Omam Biyik. Infact, this was the break through of Cameroonian football, first African country to leave its mark in a world top football tournament like the World Cup.

Almost 20 hours since the death of Diego Maradona, world leaders, politicians, musicians , footballers, just like in Cameroon have created space on their social media pages to pay tribute to one who made football a game to love. https://twitter.com/setoo9/status/1331678974242643972?s=19
Football Roving Ambassador, Roger Milla who played against Diego Maradona in 1990 thanks the football legend for what he did to football in the world

Many others have paid their tributes to the Barcelona and Napoli legend. He keeps a record of 221 goals in 424 outings at the club level.

Diego Maradona scored a total of 34 goals in 91 appearances with the Argentine national football team. He also participated in four world cups with the Albiceleste. The streets of Bueno Aires in his country have been flooded by fans and well wishers celebrating the memories of a man who marked their country in the map of world football. The President of Argentina on his part has declared three days of national mourning meanwhile his corpse will lie in state at the Presidential palace, Casa Rosada during the mourning