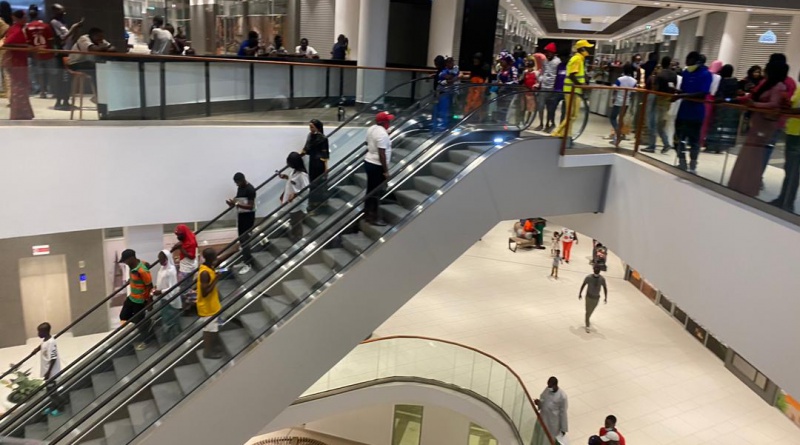 The escalator of the recently opened Douala Grand Mall is making news as social media has been flooded with videos of people struggling on it, especially for the first time.

When Jesse W. Reno came up with the idea of an elevator and George A. Wheeler and Charles Seeberger materialised it, little did they know that the device will cause such drama in Douala, Cameroon.

Any visitor who walks into the Douala Grand Mall cannot miss out on the conspicuous position of the escalator.

What is Actually Happening at the Douala Grand Mall?

Out of curiosity, some who have never been on an escalator feel they could not miss out on this golden opportunity at the Douala Grand Mall.

It is with great enthusiasm that the public of Douala responded to the call to open the doors of the Douala Grand Mall on Tuesday November 17, 2020 with Carrefour Market, the locomotive of the Mall. Visit of the gallery, experimenting with escalators, and tasting time with
1/4 pic.twitter.com/pMztv30uqs

As they visit the mall, many hurriedly stepped on the device, unprepared!

Such people fall off and roll down as the escalator moves, to the amusement of onlookers.

While some have turned it into a prank, others genuinely struggle to maintain balance on it.

Those who were yet to understand how it functions ended up falling as they struggled to climb the moving steps. Some were overtaken by panic as the escalator moved.

In the meantime, there are a few others who seem to have made the escalator a touristic site. They flood that section of the mall just to watch people go up and down. Escalators are not a new phenomenon in the country.

However, they are mostly seen in very big shops and at the airports, places some have never visited.

Even when there is an escalator, it is not always used so some people may have stepped on one but never used it as such.

Tips on Using an Escalator

– Carefully step on or off the escalator.

– Stand in the centre part of the step.

– Do not climb on the escalator with untied shoe laces and if your dress is flushing, pull it up so it doesn’t get hooked as the escalator moves.