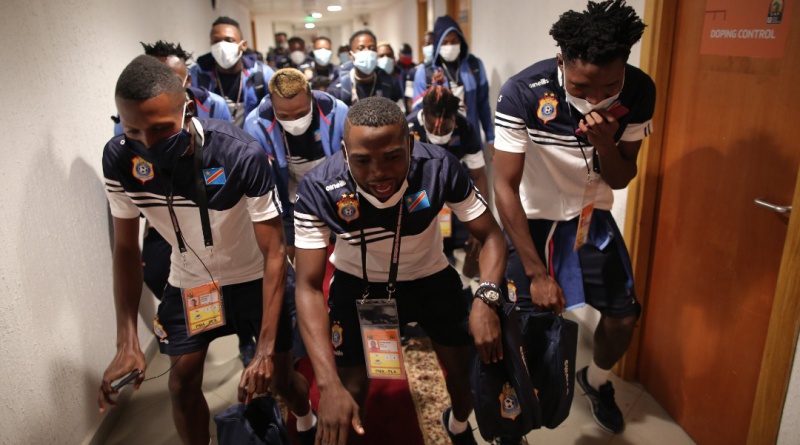 The Leopards of Democratic Republic of Congo, is one of the teams that qualified for the quater final of the 6th Edition of African Nations Championship in pool B.

The team won their day three match against Niger 2-1 at the Ahmadou Ahidjo Stadium Monday January 24 2021.

According to the coach Famphile Mihayo Kazembe it was difficult constituting the team, since 12 of its players tested positive for Covid-19 including the main coach.

” we had to mobilize all the 33 players who came in for the competition so when others had to be isolated, we had to engage the others and make them understand the stakes”. Famphile explained.

The socond goal scored at the extra time to end of match crowned the efforts of the team whose morale was broken when the news of COVID-19 was broken to the team. They will have to play against the quater final game with host team Cameroon on Saturday in Douala Japoma.

Since then the organisers of the competition, CAF and the Cameroon Government have intensified measures to curb the spread of the pandemic in the CHAN event.

All media men and women, Photographers volunteers, COCAN worker, players and other actors are subjected to Covid-19 test before each match. All entering the Stadium must wear face mask and observe a safe sitting distance. Limited number of spectators are allowed in the Stadium.

The cleaning and disinfecting services are also at work to keep surfaces clean and providing sanitizing products.

On Sunday during the halftime of the match Cameroon/ Burkina Faso, some 16 African Football legends lead by Roger Milla of Cameroon, launched the #StaySafeAfrica Campaign . It is intended to raise awareness of the presence of Covid-19 in the sports milieu and how to prevent the spread.