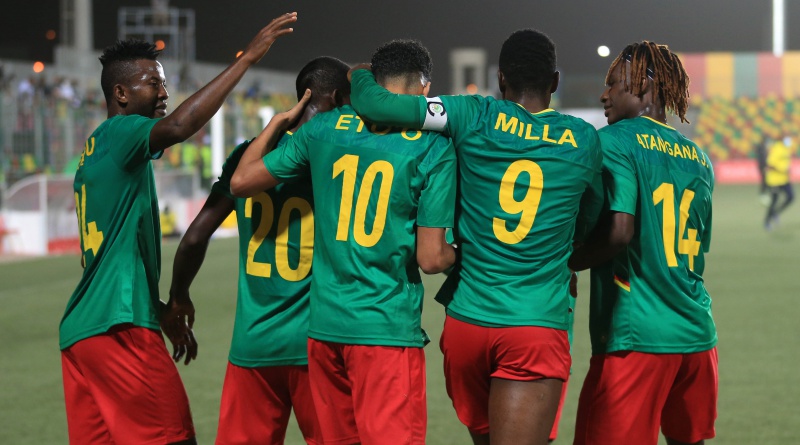 The ongoing 2021 Under 20 AFCON in Mauritania has offered the world of football a platform to discover sons of football legends like Etienne Eto’o Pineda, Sunday Jang Junior and Enzo Tchato, who just like their fathers have made headline news after their outings over there in Mauritania. Like fathers like sons, these three kids have revived the feelings of the glorious good days of football when Samuel Eto’o Fils, Roger Milla, Sunday Jang amongst many footballers made football a game of passion. Unlike his father, Jang Sunday Junior plays forward while his father was a midfielder with the national team and played the 1996 AFCON finals in South Africa.

He was one of the heavyweights with the popular Olympique Mvolye here in Yaounde while his son plays with Eding FC of the Lekie, an Elite One club in Cameroon.

Jang Sunday Junior was part of the squad that fielded in a game against Guinea in December 2020 at the UNIFFAC Cup. The son of the former Indomitable Lion scored the lone goal against Mauritania in the U-20 AFCON opening game, scored a header against Uganda to help give Cameroon another win, and was once voted Man of the Match. Just like his father, Etienne Eto’o may soon go down history as a goal hunter and scorer. In his first outing with the Baby Lions this Sunday, February 22, 2021 at the Stade Cheikha Boidiya in Nouakchott, Mauritania, the young Eto’o scored two goals and ended up Man of the Match against Mozambique. Like his father, the second goal scored by Etienne Eto’o just before half time was an incredible free kick, a  blend of tact and professionalism. The son of the football legend also assisted in the third goal scored by Kevin-Prince Milla.

Kevin-Prince Milla after scoring the goal portrayed a historic and illustrious 1990s dance by his icon Roger Milla.

The young player who bears the name Milla, a celebrated football legend in Cameroon plays with Renaissance of Ngoumou, a league Two football club in Cameroon. Enzo Tchato Mbiayi is on the left defense line with the U-20 Lions team of Cameroon back there in Mauritania. He is son of Bill Tchato, Champion of the 2002 AFCON with the Indomitable Lions of Cameroon. The footballers’ children are amongst many that have made strides in football just like their parents. The son of Rigobert Song Bahanag just signed with Paris FC in French.

These kids of footballers have help Cameroon grabbed a qualification ticket to the quarter-final stage of the U-20 AFCON with nine points and six goals.