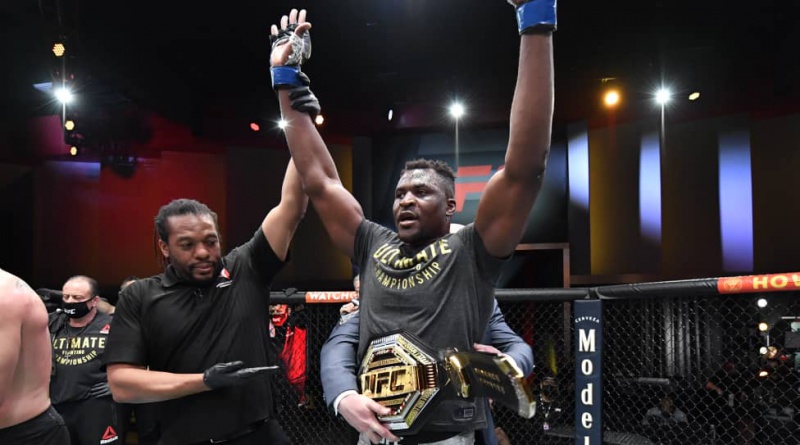 The ground breaking record makes him the third African in history to grab this highly solicited and prestigious belt after two Nigerians; Israel Adesanya and Kamaru Usman. These three Africans have put Africa on the UFC heavyweight map as the highest number from a continent to win the belt.

The fight on Saturday night was not only a second chance for Ngannou to win the title, but it was also a shot at revenge after he lost a lopsided decision to Miocic in their first meeting just over three years ago.

The Cameroonian heavyweight champion proved the best bet in the fight in terms of striking and showed great takedown defence as well.

It all culminated in a huge exchange in the second round that saw Ngannou drop Miocic with a jab and then launch another straight punch that knocked the Ohio native down. Francis Ngannou delivered an incredible hammer fist, but the fight was already over as he began celebrating as the new heavyweight king of the world.

“I don’t know if I can find the vocabulary to express this, but it feels so amazing,” Ngannou said with a smile on his face after earning the knockout win. “Even though I’ve been winning fights, I had this thing inside of me that I never released. It was like a promise that I made to myself since I was young. To prove the doubters and the people that thought I was beneath them that it wasn’t my fault. If I ever had the opportunity, I would do great and even greater and that’s what I’m here for.”

It is worth noting that Stipe Miocic survived the opening round; he did not produce much offense, and he went back to his corner with a mouse forming under his eye from the damage delivered by Ngannou.

Ngannou unleashed a perfectly timed jab that sent Miocic stumbling to the mat and that was all the Cameroonian-born knockout artist needed to see to know the end was near.

The win for Ngannou has now set him up for a monstrous showdown against former light heavyweight champion Jon Jones, who is expected to get the next shot at the title.

But then he thinks he is ready for the real business

“For my opinion, Jon Jones is the greatest of all time from mixed martial arts,” Ngannou says.

He adds, “But this time he is gonna be the challenger; I am the champ. I am ready, anytime soon. Whenever they are ready, I am ready.”

Responding to a question during a presser on his plans with the belt, the heavyweight champ said: “We will want to do with the belt and I think we are going to find a public place in Cameroon and put it there so that kids can look at the title belt and be inspired. This will help them to understand that it is a symbol of determination and that you can come from anywhere and win. It will help them to stay focused and believe in their dreams. That is what I am going to do with the belt.” Francis Ngannou, UFC heavyweight champion.