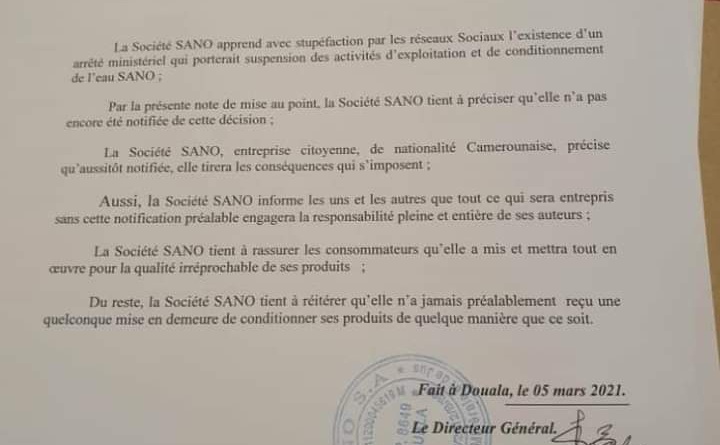 The company specialised in the processing, bottling and distribution of potable Water with the brand name SANO has been suspended for a period of six months. The company, situated at the Sincatex neighbourhood in the Douala 3 municipality, Wouri Division of the Littoral region, was suspended following observation of breaches and offenses relating to mining legislation.

The sanction is contained in a decision of the Minister of Mines, Industries and technological Development, Gabriel Dodo Ndoke.

Issued in the Capital, Yaoundé on March 4, 2020, the decisions was taken following the non respect of norms in exploitation and conditioning of water bottles and containers destined for the general public. 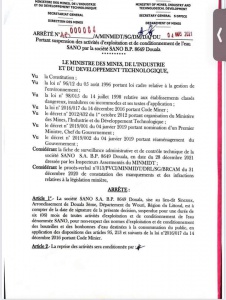 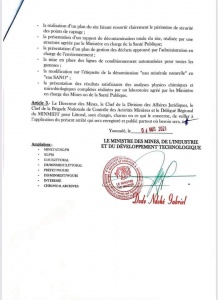 Conditions for Resumption of Activities

The release also spelt out six conditions that must be respected before the company can resume its business activities:

– The creation of a site plan clearly showing the safety perimeter around the collection points.

– The presentation of a report of total decontamination of the site, carried out by a structure approved by the Ministry in charge of health

– The presentation of a waste management plan approved by the administration in charge of the environment.

– The implementation of automated packaging lines for all ranges

– The modification on the label from the name “natural mineral water” to “SANO water”.

– The presentation of the satisfactory results of the complete physical-clinical and microbiological analyzes carried out by a laboratory approved by the Ministries in charge of Mines or of Public Health.

The director of mines, head of legal affairs division, the head of the National Brigade for control of mining activities and the Regional Delegate for Mines for the Littoral have been assigned to ensure the decision is applied.

In the wake of the order, the Director General of SANO has issued a release indicating that his company has not received any suspension order from the Ministry of Mines.  That they discovered the document on social media. 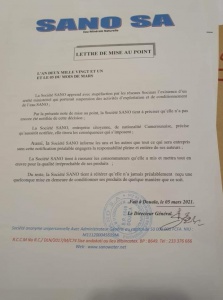