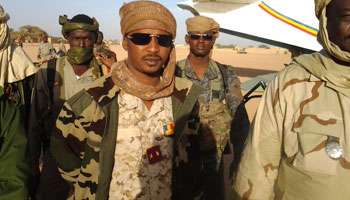 The Military Council in Chad has appointed, Mahamat Idriss Deby , son of late president Idriss Deby Itno of Chad as interim president for a period of 18 months, pending the election of a new president.

68-year-old President Idriss Deby Itno of Chad was wounded by a rebel group FACT, in the early hours of Monday, April 19, 2021. He died this Tuesday.

Groomed by his grand mother, the new interim president took up the name Mahamat Kaka which means “Grandmother” in Chadian Arabic.

He was later enrolled into the joint military school in Chad before a brief sojourn at the Military High School in d’Axe-en-Provence.

Upon his return to Chad his Father, Late President Idriss Deby Itno integrated him into the General Directorate of Security in charge of State Institutions (DGSSIE).

In May 2009, the young Chadian took part in the victorious battle of Am-Dam in Eastern Chad. His camp defeated the rebel coalition led by Timan Erdimi.

In 2010, Mahamat Idriss took command of the Armored and Bodyguard Squadron with the Directorate General of Security in charge of state institutions.

In 2012, he was appointed head of one of the three groups of the Directorate General in charge of the security of the presidential palace in Ndjamena, Chad.

In 2013, the president’s son was made second in command of the Chadian Armed Forces to intervene in Northern Mali under the major command of General Oumar Bikomo