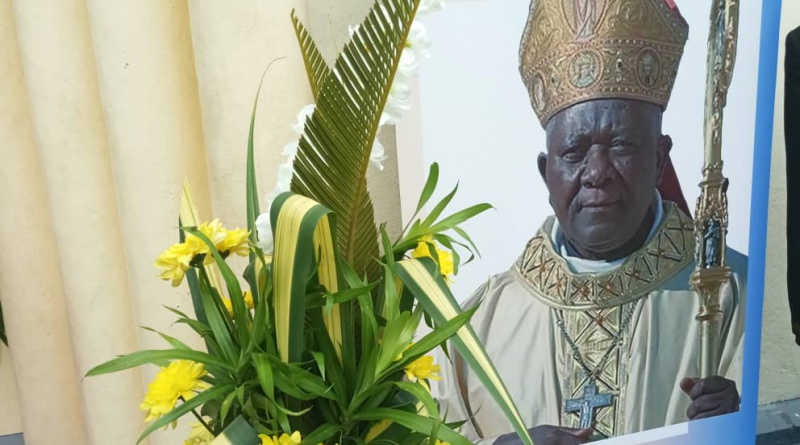 The Archbishop Emeritus of Douala; His Eminence Christian Cardinal Tumi has been laid to rest in The Saints Peter and Paul Cathedral in Douala.

He was buried after a funeral mass officiated by Philippe cardinal Ouedraogo archbishop of Ouagadougou and president of the conference of bishops of Africa and Magadascar.

The Church compound was full to capacity with the clergy from Cameroon and abroad as well as by socio-political actors in the country who turned out attended the final farewell ceremony.

Amongst the mourners was Prime Minister – Head of Government, Joseph Dion Ngute, representative of the President of the Republic, Paul Biya at the ceremony.

The Head of Government posthumously elevated the departed cardinal to the dignity of Commander of the Order of Valour; one of the highest distinctions in the country.

The Former Archbishop of Douala was buried in this Bishops’ vault located inside the cathedral. He will rest alongside his predecessors the Mgr Mailloux, Bonneau, Thomas Mongo and Simon Ntoye.

Due to COVID19 barrier measures, mainly Cardinals Archbishops and Bishops from Cameroon and abroad, top government officials, members of the Episcopal council, representatives of zones, diocesan representatives and other delegations were allowed in the premises.

The funeral programme began on Monday April 19, 2021 with the removal of corpse from the Douala Military Hospital Mortuary. It was conveyed to the Saint Peter and Paul cathedral where a series of four masses were said. Prayers and meditation sessions continued all night till 10am this Tuesday when the requiem mass was said by the Apostolic Nuncio.