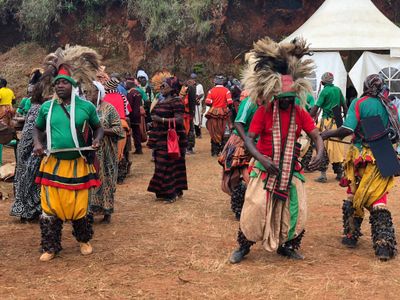 Funeral ceremonies have been prohibited from taking place in the West Region for the next two months. In a press release dated April 5, the Governor of the Region, Awa Fonka Augustine says the ban is renewable.

The decision has been inspired by the rising infections in the region since the start of the socond wave of the pandemic in Cameroon. Governor Awa Fonka Augustine wants to prevent the infections  from surging.

COVID-19 Figures in the West Region

A situation report on the evolution of  COVID-19 in Cameroon, published by the Public Health Ministry shows that from March 18-24 2021, the region recorded 677 new infections raising the total number of infections to 4399. The West Region also numbered 19 deaths same week, the highest among the country’s 10 regions. The North West Region recorded 13 deaths , the Littoral region 8 and the Centre region 5 deaths.

The Centre, Littoral and West regions have recorded the highest death rates. A total of 220 health personnel in the West Region have so far been infected with the virus.

Governor Awa Fonka Augustine however says public ceremonies will not be attended by more than 50 people as prescribed by government authorities.

“The organization of every other public ceremonies (marriages, burial ceremonies, concerts etc will be subjected to the 50 person quota, as well as all other preventive measures enforced by the Prime Minister , Head of government”.

Administrative, traditional and municipal authorities and the forces of Law and Order are expected to execute the Governor’s prohibition throughput the region.

The Governor’s prohibition follows the Centre Regional Governor’s ban on public events of more than 50 participants.

Cameroon has so far recorded more than 5000 new cases in the last 3 months , as compared to about 2000 during the first wave of ten pandemic in 2020”.

As the figures continue to surge, Public health authorities emphasize that the only way out of the health crisis is the respect of preventive measures.