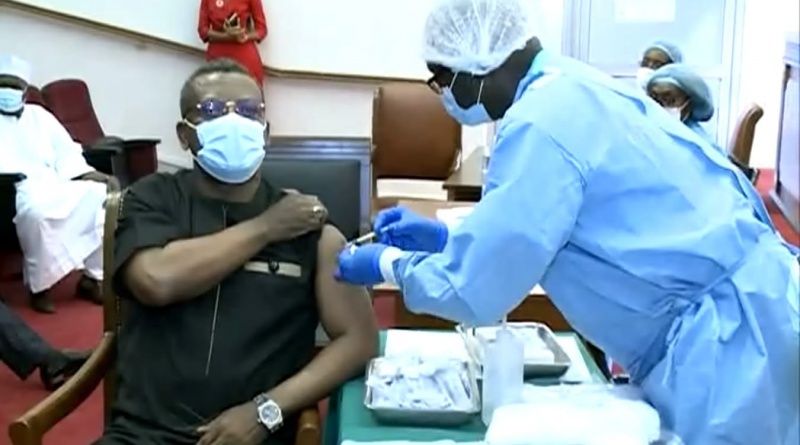 Two weeks after the first doses of COVID19 vaccines were received Cameroon, Government has launched a voluntary campaign to vaccinate members of government and those of the diplomatic corps accreditated to Yaounde.

Prime Minister – Head of Government, Chief Dr Joseph Dion Ngute was the first to be vaccinated this Tuesday April 21, 2021 at the auditorium of the PM’s office. After he was inoculated with a dose of the vaccine, the Head of Government sounded rather upbeat.

He called on Cameroonians to voluntarily go for the vaccine in order to curb the spread of the virus.

Several members of government were present at the Prime Minister’s office to voluntarily take their own doses of the vaccine.

Prime Minister Joseph Dion Ngute launched the voluntary vaccination session organised for members of government started with a call on Cameroonians to go for vaccination.

He indicated that the vaccination campaign has been organised to encourage the Cameroonian population to adhere to the vaccination option taken by the government and be receptive to the ongoing national campaign against COVID 19.

The Head of Government said the session was organised following the authorization by the President of the Republic.

Members of government who wilfully took part in the vaccination exercise had the choice between the all three COVID-19 vaccines currently present in Cameroon; Sinopharm, sputnik V or Astrazeneka.

The Presidents of the Orders of Medical Doctors and that of the Council of Pharmacists as well as the Permanent Secretary of the Enlarged Vaccination Program and other experts were also present at the vaccination site. They reassured the members of government and of the diplomatic corps on the safety and advantages of vaccination against COVID-19.