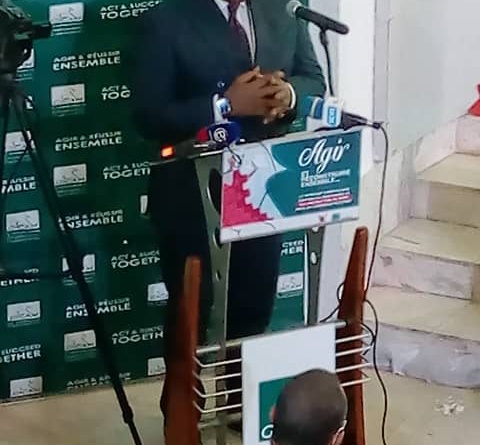 “Relaunch economic activities which can crate jobs in the North West and South West Regions”. This was the core of the message that Prime Minister Joseph Dion Ngute took to the business community in Cameroon.

He encouraged employers and investors to support the execution of The Presidential Plan for The Reconstruction and Development affected by the crisis that has hindered welfare since 2016.

The Head of Government was speaking at the headquarters of The Employers Union in Douala in Douala while presiding over a conference to popularise the Presidential Plan.

He said, any new investments in the two regions represents a source of hope for the populations affected by social unrest.
The conference was organized on the instructions of The President of the Republic to seek any new investment.

The Chairman of the reconstruction commission, Paul Tasong who presented government’s paper on the promotion of economic development in the North West and South West regions, said focus is on employment and social cohesion.

He told businessmen in Douala that the commission is still having difficulties in raising the funds principally because of the economic slowdown caused the Covid-19 pandemic.

Statistics presented at the conference indicates that the Cameroon private sector represented up to 70% of fiscal transactions in the country and a 40% contribution to the state budget in 2019.
Prime Minister Joseph Dion Ngute indicated that the private sector offers huge possibilities and should support the Presidential Plan for the Reconstruction and Development of the North West and South West Regions.

He added that the President of the Republic has taken successive measures to meet the demands of trade unions since 2016 when the crisis started adding that the Presidential Plan for the Reconstruction of the NW & SW regions is another request granted to help secure peace.

He urged the business leaders to support the plan by making investments in the two regions which can generate employment and restore hope within the population.

Joseph Dion Ngute said all though all regions of the country attract the attention of the government, the NW and SW warrant particular attention to help rebuild the social fabric disrupted by years violence and destruction.

He reassured the business community that the government will not interfere in the financial management of any business initiatives undertaken within the framework of the Presidential plan adding that the underdevelopment program implementing partner of the initiative can always guarantee transparency.

The President of the Employers Union; Celestin Tawamba for his part lauded the visit of the PM as historic and good sign for public private collaboration in Cameroon.

He reassures the Prime Minister that the private sector wants to participate in the reconstruction process in the two regions.

He said it is time for the daily count of number of new investments to replace the count of number of victims in the North West and South West so that the two regions can fully resume their positions as major contributors to the national economy.

The conference to present the Presidential plan for the Reconstruction and development of the North West and South West regions also featured a detailed presentation of the plan, the different sectors open for investment and a question and answer session.

The first ever visit of a Prime Minister to the headquarters of the employers union since its creation 64 years ago has been hailed as a sure sign of openness and consideration for the private sector in Cameroon.