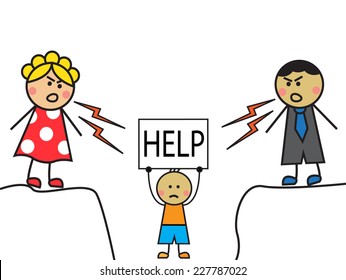 “She even once poured hot oil on me to check if the oil was hot enough to fry ‘canda’ (cow skin). Till today, I still have the scar at the back of my lap,” Maria recounts in a way that sends shivers down my spine.

Child Abuse defined by the Oxford Dictionary as the “physical maltreatment or sexual molestation of a child” is still a vice in Cameroon, Africa and the World as a whole.

As Cameroon joins the International community to commemorate the World Day Against Child Labour this June 12, focus extends to Child Abuse which entails Child Labour and other forms of intentional harm inflicted on children.

There are testimonies of many who have suffered this vice, yet there is still hope for a better future just like Maria who recounts her ordeal and encourages her peers in distress to stay firm and trust in God.

Maria (real name withheld) is just one of many who has experienced child abuse in many forms.

“I have experienced child abuse almost throughout my childhood especially when I got into Class 1 in Primary School. My Mother had to go the village to get traditional medicine to treat my younger sister so my Father took me to his elder brother,” she explains.

Maria says she went through a painful experience in the hands of her Uncle’s wife. Not only did she go to school on an empty stomach but she had to fetch water all alone (as a little girl) until she lost hair in the middle of her head from carrying the heavy basins on her head.

“When plaiting my hair she will attach my flesh to it,” she sadly remembers.

From the first house, Maria moved to the second where it was only from 6pm in the evening that she will be sent to fetch water from an inaccessible stream.

“Even when I fill the drum during the day she will come back home and pour it or wash her boots inside and make me refill it that night. She even once poured hot oil on me because she wanted to check if the oil was hot enough to fry ‘canda’ (cow skin). Till date, I have that scar at the back of my lap,” Maria explains in tears.

“Sometimes she will make me sleep with the fowls and she will keep watching, making sure I actually lie down and in the morning my skin is covered with insects from the fowls and even droppings. This is the first time I contracted ‘cam no go’ (a skin disease caused by exposure to dirt),” laments Maria.

Maria adds that whenever her Father was to visit, her Aunt will dress her up neatly to hide her evil deeds and paint a picture of well-being.

“When her daughter wears a underwear, I will have to wear the same underwear the next day,” she adds. “She will feed her son heavily in the evening then give him laxative and I will sleep under his buttock on the same bed. At night, when the laxatives kick in, he will just be pooping directly into my face. I ran away to another Aunt’s place but she came back for me, saying I was entrusted to her.” By then, Maria was in Class 4.

In the third house Maria moved to, the stress was less especially as she was already attending a Teacher Training School though she had a hard time feeding. “My mates will come and give me bread and chocolate at the well and I will eat rushingly so that none of my Aunty’s children would see me,” Maria chuckles, now stronger than she was back then.

“House number 4, 5 and 6 were all hell on me especially the fourth house where the workload on me was really much,” she recounts.

By then I already had my Advanced Level certificate and I was 20. Each time I complained to my Father, he will just tell me, ‘My daughter be strong. Consider that you are on a training ground; you won’t stay there forever.'”

After enduring in the sixth house, Maria told her Father that she will rather stay with him in the village than keep rotating from house to house.

“The worst part is that in all these houses I never had even five minutes to myself.” Maria said.

“When I left, I went to Buea and started hustling… washing plates in a restaurant, selling groundnuts and picking palm fruits and snails to sell. This is what I used to raise money to apply for many competitive entrance examinations. Unfortunately, I failed all that year.”

Maria explains that when she failed all the competitive entrance examinations, her father told her it is not the end of life and the next year, she passed all the exams and even had a problem of choice!

“My father helped me to make a choice,” she says with a smile.

Unlike other children held hostage in child labour and abuse with no one to support them, Maria’s Father was present to ensure she went to school.

“My father never joked with my studies. Even when I was moving from one house to another, he made sure my fees were always paid,” she emphasises.

“Child abuse does not put a full stop on your life”

“Child abuse is one of the worst things someone could go through but for those who are already there, it is not a full stop in your life… all successful people in the world had a life of hurdles. Believe in yourself that one day you will be where your host is or even better. The Lord is always great… when I look back I thank the Lord for everything,” states Maria.

Maria also affirms, “Living in many homes actually made me learn a lot as I got to see how challenges are handled in each home. However, I don’t wish my kids go through the life I went through reason why I am doing my part to offer them my best.”

“If you have survived child abuse, it means you have already succeeded in life because no one survives such to become unsuccessful. Don’t ever stop dreaming as long as you are alive. I had my Advance Level in 2004 but it is in 2019 that I enrolled in the university. I have also been able to sponsor my kid sisters through university and I am a mother, a worker and a student, aside other responsibilities. I have stopped asking from God but I just thank Him for where I am right now. I could never have imagined I will one day reach this stage in my life. God is great. What doesn’t kill you fortifies and strengthens you,” concludes Maria with a broad smile in optimism.

The Law and Child Abuse in Cameroon

Child abuse in all its forms has been greatly condemned by international organizations especially the United Nations and its specialized agencies.

In Cameroon, sections of Chapter IV of the Penal Code which focuses on Children and the Family has spelled out sanctions for different forms of child abuse including forced labour (child labour), sexual abuse and forced marriage amongst others.

Ministries like that of Labour and Social Security, Justice, Social Affairs and Women Empowerment and the Family are also existing with part of their missions centred on protecting children.

Furthermore, many Non Governmental Organizations have also engaged in protecting children from abuse with their doors always open to receive complaints aimed at saving children.