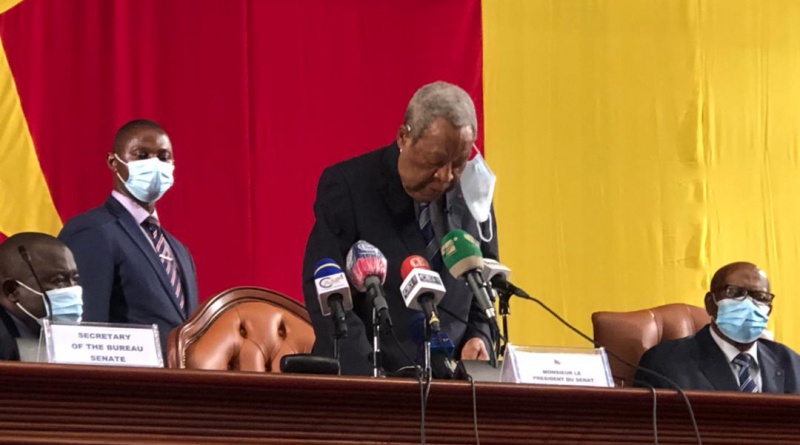 The second ordinary session of the Upper House of Assembly for the 2021 legislative year has opened this Tuesday 8, June. The session was presided over by the Senate President, Marcel Niat Njifenji.

Present at the opening ceremony was the Prime Minister Head of Government Chief Doctor Joseph Dion Ngute and other government ministers. In an opening statement, the Senate President paid tribute to former colleagues who died among which was Eldest Member of parliament, Senator Emeritus Nfon Victor Mukete who passed away on April 10 2021.

As regards the current health crisis, the President said the pandemic has continued to cause great loss in human lives and the economic growth of Cameroon.

Senator Niat urged his colleagues to join the government in sensitising the population on the importance of observing COVID-19 restrictions.

He said government also needs to multiply sensitization campaigns in order to stop the reluctance and arouse more interest in the vaccination whose importance cannot be over emphasised.
“Thanks to the vaccination and respect of social Distancing measures prescribed by Government, we can nurse the hope of a return to normal life in the near future and the possibility of celebrating our National Day and all the other feasts with usual pomp and pageantry as in the past, before the pandemic.” The President said.

On the impact of the pandemic at the economic level, the President said the Senate welcomes the support of the international community and some friendly countries to Cameroon, in order to bring about the necessary booster to the economy.

He especially recognised the summit recently organised by France in Paris on financing African Economies.

Senator Niat called on all friendly and donor countries to work together so that the global pandemic can be defeated.

The President of the Senate said the “New Deal for Africa” advocacy published by the President of the Republic, H.E Paul Biya and other African and European leader is highly welcomed and insisted on its immediate implementation in order to help economies and health systems deeply and sustainably affected by the COVID-19 pandemic.

Senator Marcel Niat Njifenji also condemned all act of violence which provoked the 4th session of the 5th Legislative Period of the Pan African Parliament in South Africa to end abruptly.

He called on members of the Pan African Parliament to be calm and show more proof of responsibility.

The Senate President called on the members of the Upper House to work together as they carry out their constitutional missions of voting laws and controlling government action.