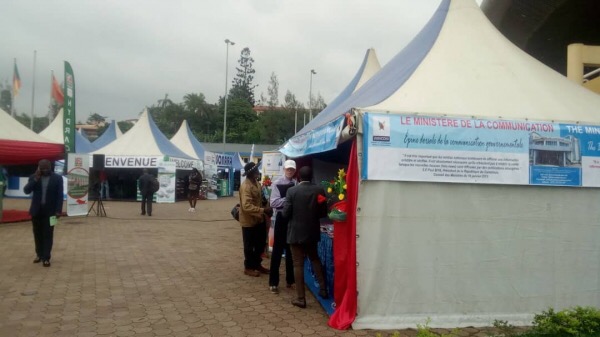 Organisers of the Fair of Government Actions have announced that next year’s edition will run for 10 days up from 7 days this year. Patrice Assiga, Government’s agent for the fair made the announcement during the closing ceremony that was chaired by the Secretary General at the Ministry of Communication, Professor Felix Zogo on behalf of the Minister of Communication.

Professor Zogo saluted the organisation of the event that has given an opportunity for Cameroonians to better understand government’s vision as enshrined in the National Development Strategy 2020-2030.

He said the quality of the conference and the debates that ensued lead to enriching enlightening on the vision to transform Cameroon to an emergent economy through the development of human resources, creation of employment, technological advancement, democracy and reduction of poverty.The Minister’s representative also saluted the public and Private sector partnership that have led to the successful organisation of the fair.

The fair that was organised on the theme: “From the strategic document on economic growth (DSCE) to the National Development Strategy 2020 – 2030: what perspective for Cameroon?” featured ten conference.

The inaugural conference on the theme was delivered by the Minister of the Economy, Planning and Regional Development, Alamine Ousman Mey.

He outlined the principal pillars and the essential steps towards attaining the development vision expected by government. He called on all Cameroonians to contribute in the development drive of the nation.

His Inaugural lecture came after the Minister of Communication, Rene Emmanuel Sadi, on behalf of the Prime Minister had official declared open the conference on Monday July 26, 2021.

The conference on the theme “From the strategic document on economic growth (DSCE) to the National Development Strategy 2020 – 2030: what perspective for Cameroon?” by the Minister of the Economy, Planning and Regional Development, continued on Tuesday with participants asking questions and receiving explanations on the contours of the strategy.

“Financing of lodging facilities in Cameroon” was theme of the conference that held on day three of the fair. The General Manager of Credit Foncier du Cameroon, Jean Paul Missi explained the mechanisms put in place by government to facilitate access to land and decent lodging.

A representative of the Cotton Development Corporation, SODECOTON evaluation the current economic situation, highlighted the strengths and perspectives during day four conferences. The day was marked by conference from the Director General of the Investment Promotion Agency, Marthe Angeline Minja on the Promotion of investments in the era of the 2020-2030, National Development Strategy.

The last conference of the day was that given by a representative of the Minister of Employment and Vocational training on the Professional training adapted to the needs of enterprises.

The Director General of the National Civil Status Registration Office, give the first of three conferences scheduled on Friday. He elaborated on the theme, the putting in place of a computerised information system for Civil Status.

The conference on Negative practice to curb in Public Contracts through the putting in Place of the COLEPS system was given by officials of the Ministry Delegate at the Presidency in charge of the Public Contracts.

Contributions of the Supreme State Audit in improving governance in decentralised authorities in Cameroon were also explained in the last conference of the day.

The series of conference ended with the Citizen of the National Development Strategy 2030. Professor Patrick Abane Engolo expert in Public Law outlined the responsibility of Cameroonians towards attaining the objectives set for 2030.