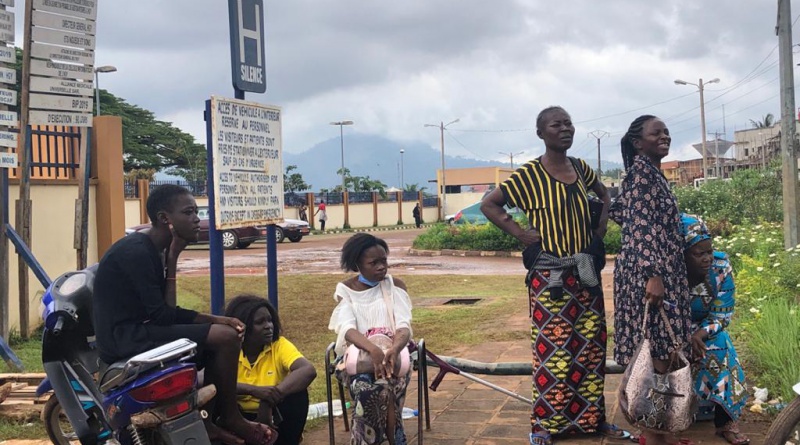 Scores of patients suffering from kidney failure are striking at the Yaoundé General hospital in Cameroon’s Capital, barely a month after the hospital was equipped  with 10 new dialysis machines.

The strike that is in its second day began as early as 5 am on October, 21. Yaounde’s General Hospital provides health care to over 400 kidney failure patients. Some have been on dialysis for as long as 14 years.

But not all the patients are taking part in the strike. Some are to frail to stay in the rain or scorching sun for long hours. These patients are seated at the dialysis unit of the hospital, waiting for their turn to receive the life-saving health care service.

Patients who still have some stamina left, are seated at the external courtyard of the Hospital, with a list of complains they want the government to address.

The patients have addressed a missive to the Prime Minister, stating their complains. Four key complains feature on the letter.

– Disruption of dialysis sessions for the last one month
– Insufficient generators with respect to number of patients available
– Absence of ultra pure water used for dialysis
The patients say water used for dialysis treatment is of poor quality, supplied by the national water supply company, Camwater noted for incessant water supply interruptions.

One dialysis session is supposed to last for four hours, but the patients say the hospital has reduced that time to three hours. Water used for dialysis does not also meet requirements they say.

In the letter addressed to the Prime Minister, the kidney patients propose a series of solutions that will solve the current problems. They include ;

Regardless, some kidney patients are currently on dialysis amidst at the current challenges. And there’s a long list of others waiting to be saved from death.

Protests from kidney patients is one of the most frequent in hospitals. The last strike action was in April 2021, at the Yaoundé Teaching Hospital . Its has only been 6 months, and the patients are out on the streets again. Patients want to permanently change the narrative. They are asking the government should resolve the problem once and for all.