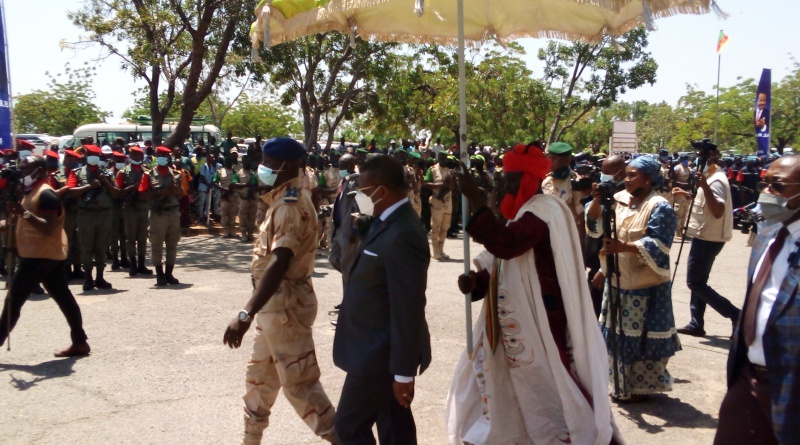 Enthusiastic crowds lined up the streets of the Plateau neighborhood up to the Garoua International airport early  to Wednesday to welcome to Prime Minister Joseph Dion Ngute on his first official visit to the region.

When the Camairco flight having on board the Head of Government touched down at the airport the mass of people waiting dived into celebration chanting songs, drumming and playing trumpets.

The Governor of the North Region, Jean Abate Edii and a host of local dignitaries were at the tarmac to receive the Prime Minister at the foot of the plane.

The celebration outside was temporarily suspended as the different detachments of the Military took position for the singing of the National Anthem.

The Prime Minister reviewed the troops before going to greet the dignitaries of the region amongst whom was the Lamido of Garoua, Ibrahim El Rachidini. He continued greetings the long chain of personalities as well as groups of political parties that also turned out at the airport.

As the Prime Minister’s motorcade took off,  it was greeted by crowds of school children, curious citizens as well as supporters of the CPDM and NUDP political parties who had lined up the streets signing patriotic songs and waving the National Flag.

Prime Minister Joseph Dion Ngute greeted the chanting crowds as he proceeded to Ribadou Hotel where he is lodging during the two day visit to the region.

Joseph Dion Ngute granted audience to some personalities of the region.
According to the Prime Minister’s program, he will travel to Figuil to lay the foundation stone for the construction of the Clinker and cement production line in Figuil, North Region of Cameroon.