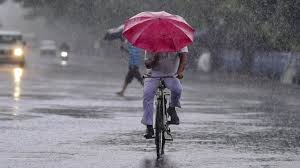 The rainy season is here! It’s been rainy in Yaounde, Cameroon’s Capital for the past three weeks nearly on a daily basis . Other cities like Douala, Bamenda, Dschang, and Buea have also reported frequent downpours.

June’s scorching sun has given way to the rains, which have altered daily routines for most people.

There are two seasons in Cameroon; the dry and rainy seasons. But in Yaounde, inhabitants witness these seasons twice a year.

As the rains continue to pour, inhabitants have gotten used to going out with umbrellas, or rain coats. It is difficult to predict when it will rain. Most of the times, the rains pour down at very short notice.

Those who do not have umbrellas are usually ready to spend more time out of home. If it rains, they need to shelter themselves somewhere, and wait for the rains to cease before they go home.

Dressing too has witnessed lots of changes. It is time for jackets, jumpsuits, jeans, rain coats, rain boots or other shoes adapted for the season.

Rains and the school

On a rainy day, it is common to find pupils, students and even workers arrive in schools and offices late.

The rains have returned less than a month after schools reopened. It’s a challenge parents, pupils and students have to live up to.

Back to school shopping continues for parents who had not thought of the rainy season . Most of them are now rushing into shops and supermarkets to purchase umbrellas, rain coats, and rain boots for their children.

Heavy downpours will continue for the entire month of October, till November when the dry season starts, and routines change again.