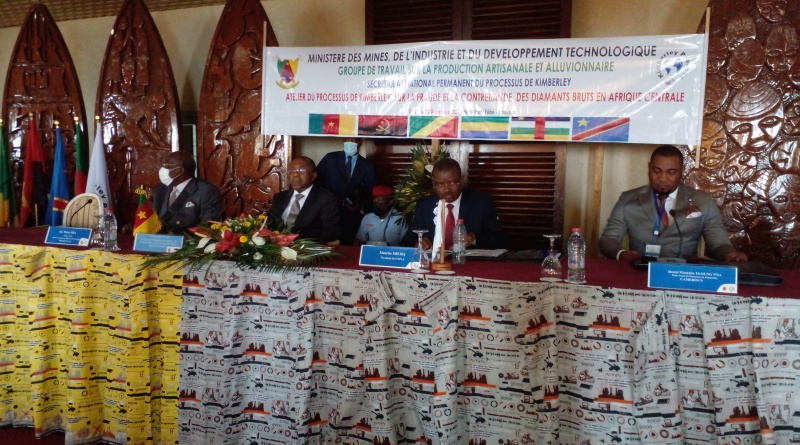 Cameroon, Angola, Central African Republic, the Democratic Republic of Congo, Congo and Gabon are set to tackle fraud and smuggling of diamonds in the Central African Subregion.

Their readiness is spelled out in a series of recommendations arrived at, at the end of a three-day workshop on fighting fraud and contraband of diamonds in Central Africa under the banner of the Kimberley Process Certification System.

The experts from these six African countries who began discussions on Monday December 20, 2021, read out their recommendations in the closing ceremony this December 22 chaired by the Secretary of State to the Minister of Mines, Fuh Callistus Gentry.

1. Reinforce collaboration between institutions that fight against fraud and contraband minining.

i. At the national level:

– Create task forces comprising all stakeholders where they dont exist

ii. At the regional level:

– Prioritise the exchange of information in real time through systems of launching rapid alerts at the national and international levels.

– Carry out concerted actions at national and regional level.

– Exchange data in relation to licensed buyers and those registered as sales offices according to the systems in place to ease sales (know your customer).

– Transmit every three months, periodic reports to workgroups on salient points in the fight agaibst

– Favour the signing of accords between Central African countries and the countries importing diamond in view of assuring the follow-up of cases of suspicion and identifying mafia networks.
– Carry out investigative missions to non-member neighbouring countries (Chad and South Sudan) to discourage fraud and smuggling of diamonds.

2. Reinforce the capacities and competences of members of thr taskforce

– Organise trainings on what the Kimberley Process is all about

– Reinforce the capacities of staff on the laws and members of taskforces on investigation techniques.

– At the national level, evaluate the risks linked to the diamond sector

3. Reinforce the putting in place of the requirements of the Kimberley Process in terms of internal control

– Facilitate access to information on actors in the chain

– Encourage enterprises in the diamond supply chain to apply the (OCDE) directives.

– Sollicit support towards the creation of a commission of Ministers of Mines of member countries in view of framing the activities of regional cooperation of the Kimberley Process.

– Encourage the Government of Gabon to accelerate the procedure which will lead to the exportation of its diamond.