Sometime last week, social media was flooded with pictures of the new monument erected at the Prime Minister’s Office Roundabout in Yaounde. It seems to have charmed many a Cameroonian.

“Taxi, Rondpoint J’aime mon Pays” loosely translated to English as “I love my Country Roundabout”, shouted a young man boarding a taxi to the Roundabout of the Prime Minister’s Office.

This young Cameroonian has gone further to give the roundabout his own name.

“The new monument is a beauty, I have to say. For the first time in a while, both official languages are showcased in equal characters. The palms holding the map are an indication that everyone from all the corners of Cameroon is responsible for the peace, prosperity, progress and unity of the nation. When it’s beautiful, it has to be said,” Larry W remarks. “It is a good piece of art that instills the spirit of patriotism in Cameroonians. It is good to be patrioric,” says Ndah H.

He however argues that citizens’ love for the country is not achieved by only erecting monuments, but also through good governance.

Another Yaounde inhabitant describes the monument as “Belfast in Africa”. She insists that the monument makes Yaounde look like Belfast in Northern Ireland. 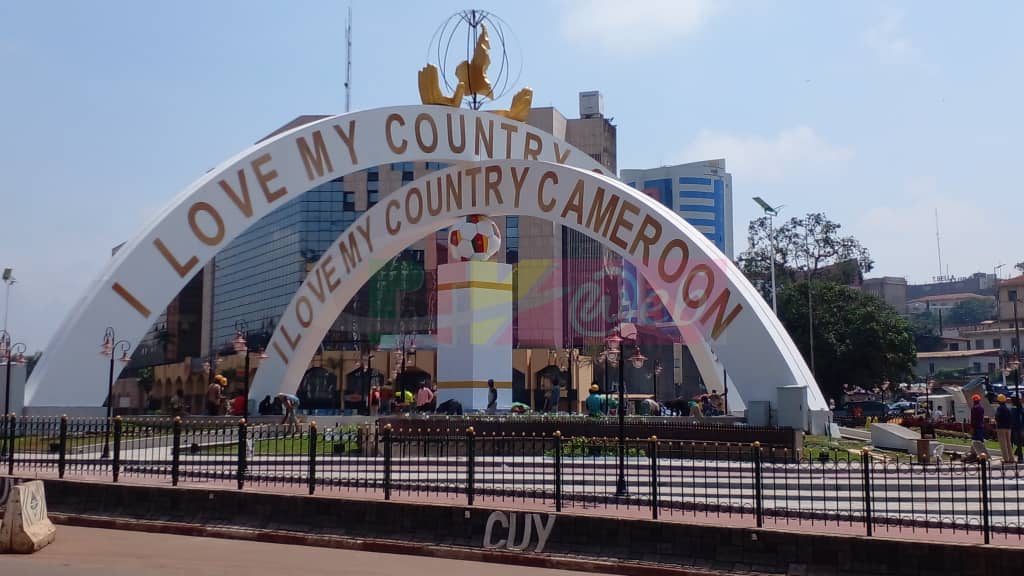 Laura N, a teacher agrees that the monument is beautiful and the message inscribed is pleasant.

“The ball is symbolic of Cameroon reassuring us that it is a football nation especially with Cameroon hosting the AFCON and her perfomances at the AFCONs. We now have a new venue to take pictures especially wedding pictures,” she adds with a grin. “Difficult to explain what you see on a status…but it looks beautiful,” she remarks.

The new monument erected at the Roundabout of the Prime Minister’s Office has two palms carrying the map of Cameroon, two arches with “I love my country Cameroon” and “J’aime mon pays le Cameroun inscribed on both sides. A football is underneath the arches and a decorated green space and fountains. The monument is still to be inaugurated and opened to public use. Cameroonians are anxiously waiting for this unique event in the life of the country.