Football clubs of the professional football league are intensifying preparations for the 2022/2023 sporting season.

Club managers are recruiting new players and coaches while others are breaking up with coaches who didn’t produce expected results in the previous season.

The 2021 Cup of Cameroon winners, PWD of Bamenda after going separate ways with coach David Pagou, have appointed former Yong Sports Academy lead trainer, Nkabyo Martin. Nkabyo returns to the the Abakwa boys for the third time after two stints in 2013 and 2016.

Six new players have joined the club since the recruitment of the new coach.

Amongst them are three defenders including veteran leftback, Etta Bawak from Al Merrikh in Sudan, Eric Enjenwei Api from Astres of Douala and Abanke Abanke Eric from Aigle Royal.

Bamenda based club, Yong Sports Academy has signed Anumewa Franklin as assistant Coach on a one year deal.

Aigle Royal of the Menoua

Former PWD coach, David Pagou has taken up duty with his new club, Aigles Royal de Menoua. He has signed a two year deal with the Dschang based side. He replaces Alain Nseme who was a caretaker coach in the later part of last season.

Supporters of Canon were taken by surprise last week following the non renwal of the contract of coach, Birwe Minkeo contract by the board.

The tactician who has been in charge of Mekok Mengonda for over two years announced his departure from the club on social media as he expressed gratitude to the supporters for their loyalty.

The transfers window is still open and recruitments will continue in other clubs as each side looks forward to an impressive performance during the 2022-2023 season. 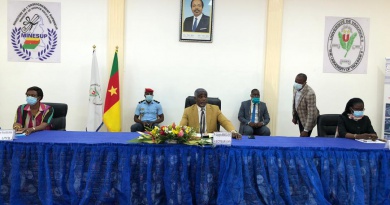