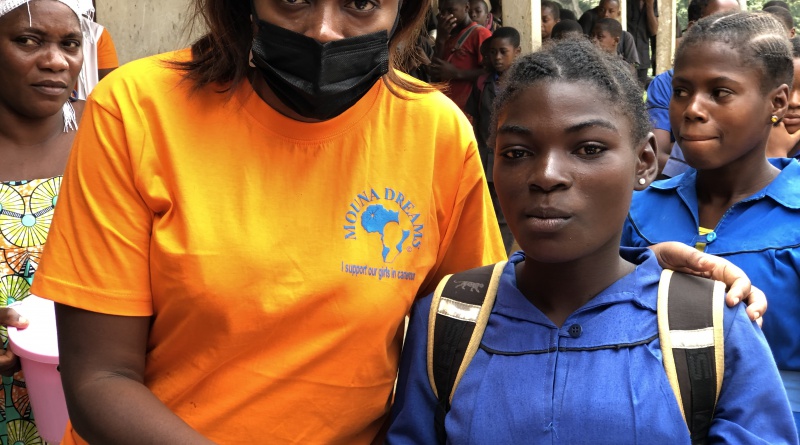 The nonprofit organization Mouna Dreams has empowered young girls in the Bonjock subdivision in the Centre region of Cameroon with self care knowledge on sexual reproduction and also handed them sanitary kits to better take care of themselves.

School girls from three different institutions were grouped together in the Lindoï public school where they were educated on the pertinent issue. The expert brought in by the Mouna Dreams foundation drilled the girls on three different topics; reproductive health, personal hygiene and dangers associated to STIs.

Reproductive Health; The situation of the young girl in Lindoï

It was quite surprising how very little the young girls, most of them of teenage age knew about their menstrual cycle. Some of them who are already of age and experiencing their monthly periods said they did not quite understand the changes their bodies were going through.

Ngo Djob Jaqueline, a teacher in one the schools in Bonjock said the ignorance shown by the young girls is culturally motivated.

Bikolo Mveng, principal of the government secondary school Lindoï agreed that many parents in Lindoï do not discuss reproductive health issues with their daughters. He said this subject is still regarded as a taboo topic in Lindoï.

A teacher shared his observations about the girls in his school.

“Parents still fear talking about sexual reproduction with their daughters” he said. “When most of these girls reach puberty and start menstruating their bodies go through a lot of changes. For some of them their breast develop, but instead of talking to them about these changes, some of their parents result in tying their them up with cloths or even breast ironing,” he added.

After over three hours of enlightening the girls about their health and hygiene, they were quite happy to have gained such knowledge. Some openly shared their personal experiences and with the help of the Mouna Dreams experts and volunteers were able to map out their menstrual cycle. At the end of the exercise, the Mouna Dreams organisation handed the girls each a sanitary kit made up of, a bucket, sanitary pads, towels and washing soap.

The community thanked the association for their continuous support and philanthropic works they have embarked on over the years and begged that it should be extended to other rural areas of the Cameroon.